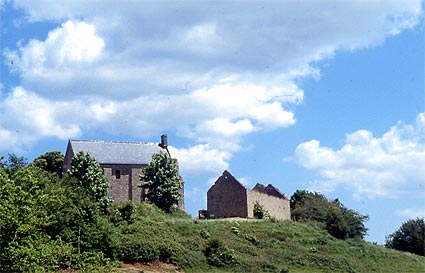 Location: Englesqueville-la-Percee, in the Calvados departement of France (Basse-Normandie Region).
Built: 12th century.
Condition: Ruins.
Ownership / Access: Now a farm.
ISMH Reference Number: PA00111298
Notes: Château de Beaumont-le-Richard, located in the town of Englesqueville-la-Percee, is of Anglo-Norman architecture. It dates from the twelfth century. This castle is one of the last examples of stately home of that era still standing.Built on a hill, the lordship existed for at least one thousand. The castle is named after Richard the Hommet - (1115-11802) great-grandfather of Jordan Hommet, Constable of Normandy, lord of Varenguebec, the Hommet and Beaumont-le-Richard. In 1220, Enguerrand of Hommet gives Mondaye Abbey church and tithes of Beaumont-le-Richart3. The lordship is transmitted families family, but no longer a home for his lords, it was transformed into a farm. The castle is the subject of a classification as historical monuments since September 1919 and an inscription since February 1997.