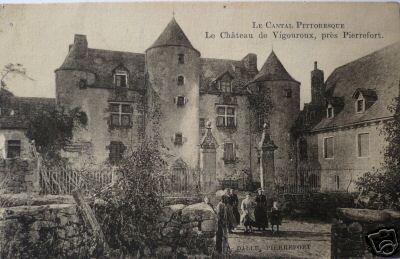 Location: Saint-Martin-sous-Vigouroux, in the Cantal departement of France (Auvergne Region).
Built: 12th century.
Condition: In good condition.
Ownership / Access: Private home.
Notes: Château de Vigouroux is located in the municipality of Saint-Martin-sous-Vigouroux Cantal and had two building: a castle, capital of an ancient lordship, owned by the viscounts of Murat Carlat until then 1791 and a pleasure palace built by close family Berthomier who had no rights over the fiefdom of Vigouroux and is the only one to survive today. A family Vigouroux is attested from the twelfth century. This former lordship which constituted one of the commandments of the Viscount of Murat, then Carlat existed since the eleventh century. This fortress was destroyed in 1360 by John Chandos, lieutenant of the King of England.