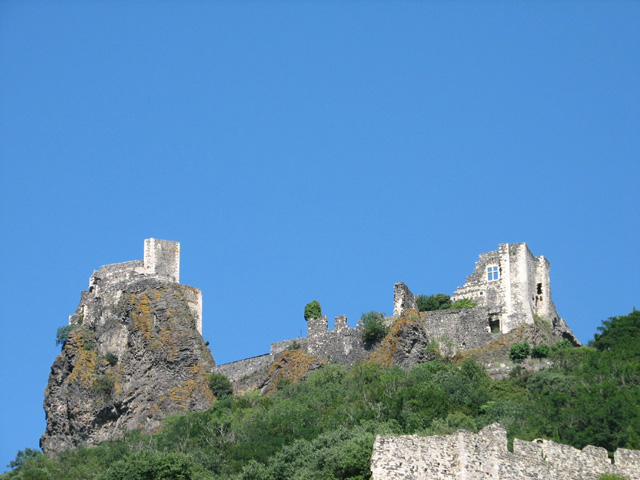 Location: Rochemaure, in the Cantal departement of France (Auvergne Region).
Built: 1120.
Condition: Remains.
Ownership / Access: --
Notes: Château de Rochemaure ruins are located on the town of Rochemaure in the Ardèche department. The keep was built between 1120 and 1140. The manor house and the walls date only the thirteenth century. The owners succeed: the Adhemar of Le Puy, lords of Rochemaure until 1359, the Levis-Ventadour until 1694, the Rohan-Soubise until 1784, Garnier Hières until 1912 of the Massin Miraval up 'in 1974, when the castle was sold to the municipality for a symbolic franc. In 1598, the new governor of Jacques Hilaire prefers to build a new castle, the castle of Joviac. The castle was abandoned in 1630. In 1730, the owner, Prince de Rohan Hercules sells roofing to cover a barn. The castle, accompanied by his two walls and tower of Guast are subject to a classification as historical monuments since 22 March 1924. The share crenellated walls of the castle and down into the valley. The tower of Guast located halfway up the crenellated ramparts down to the village is the most important. She could go back to the tenth century. Built on a basalt dyke, it is itself a second castle, although less important than the main castle. His position enabled a broad control of the Rhone.