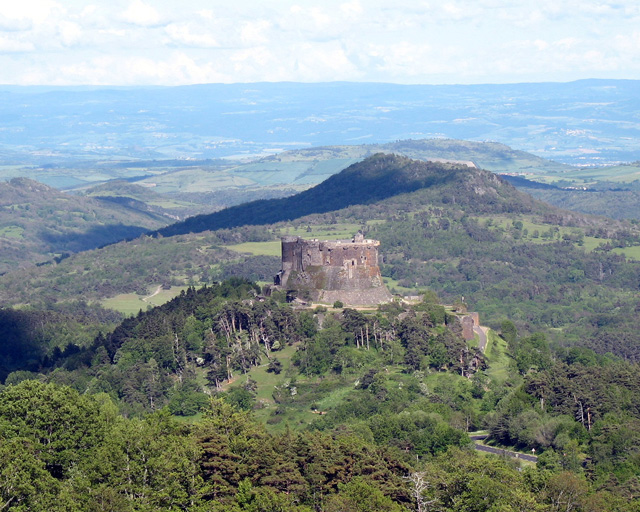 Location: Murol, in the Puy-de-Dôme departement of France (Auvergne Region).
Built: 12th Century.
Condition: Ruined.
Ownership / Access: Municipality of Murol.
Notes: The Château de Murol is a castle overlooking the town of Murol in the département of Puy-de-Dôme in the Auvergne région, France. The castle has been developed as an important tourist site in recent years. The Compagnons de Gabriel organise guided tours and son et lumière shows designed to give a genuine view of life in a medieval castle. Displays of medieval martial arts are given in the lower courtyard. Entrance through the outer curtain wall is by a fortified gatehouse in the south. The Renaissance Pavilion is in the outer courtyard. Though dilipated, the facade still shows ancient mouldings and pilasters. The inner castle, to the north, boasts 10 m (33 ft) high walls, built on a basalt base. Next to the keep, connected to a smaller tower by a curtain wall, are the two chapels, the older from the 13th century and the other 15th century. A ramp leads to a door, decorated with the arms of the Murol and d'Estaing families, that gives access to the inner courtyard. Still visible are the remains of a gallery, the kitchen, a bakery and several outbuildings. The curtain walls can be reached up a spiral staircase and it possible to walk all round the ramparts. From the top of the keep the view extends over the town of Murol, the Couze Valley, Lake Chambon, Monts Dore and the Tartaret volcano.

How To Get To Château de Murol (Map):