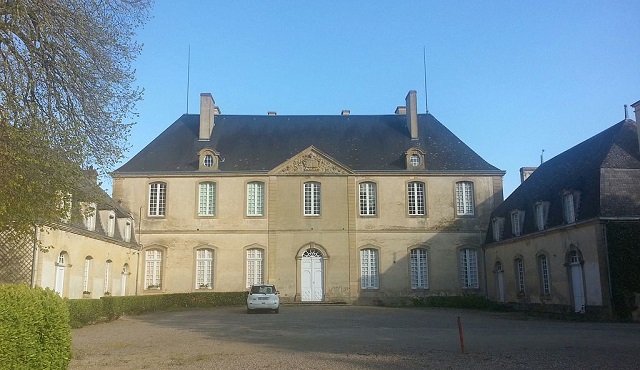 Location: Étroussat, in the Allier departement of France (Aquitaine Region).
Built: --.
Condition: Remains.
Ownership / Access: Private.
Notes: The castle of Douzon is a castle located in Étroussat, France.The estate includes the remains of an old 14th-century castle, of which there is a square guard dungeon (turret built on the top of a building, where a watchman was standing), typical of Bourbonnais military architecture. Following a fire in 1723, a castle was built in the 18th century by the architect Clément, north of the original castle. The main rectangular dwelling has two levels with a roof with straight slopes pierced with ox-eye, and two wings in return comprising a ground floor and a roof at the Mansart. Unfinished decors of the 18th century are found in three rooms of the castle: the office room, the dining room and the large living room.At the beginning of the fourteenth century, the land of Douzon belonged to Jean d'Avenieres, knight, lord of Douzon. By marriage, Douzon passed from the family of Avenieres to Dinet de Chateauneuf, lord of Pierrebrune, husband of Marguerite d'Avenières around 1400. The fief then passed from the Châteauneuf to the Rochedragon and then to the Chaussecourte after the marriage of Catherine de Rochedragon with Louis Of Chaussecourte. Around 1590, he passed by marriage to Jean-Paul Audier, then around 1625 to Symphorien d'Arfeuilles. Around 1700, Jeanne-Marie d'Arfeuilles married Philibert du Buysson, councilor of the king, mayor of Moulins. The land of Douzon was erected in county in favor of his son, François du Buysson (1704-1769), musketeer of the king, captain of dragoons, knight of Saint-Louis. It was he who built the castle in its present form. His son Denis-Michel-Philibert (1736-1793), Count of Douzon, also an officer of dragoons, was commander of the troops of Moulins and brigadier of the king's armies. In 1788 he sat in the provincial assembly of Bourbonnais, then was elected deputy of the nobility to the States-General, but resigned in July 1789. He emigrated to Switzerland and then returned to France. He was arrested and transferred to Lyons, and sentenced to death by the revolutionaries of Lyons with thirty-one other notables of the Bourbonnais; He was guillotined on the 11th Nivose year II (December 31, 1793). As early as 1774, Douzon had been sold to Louis-Charles-Antoine Girard, lord of Rozet and Charbonnieres (to Barberier), former estate manager. One of his sons sold the land of Douzon on the 2nd Nivose year XI to Jacques-Marie-Pierre Loisel (1776-1858). The latter was mayor of Etrusat, president of the General Council of the Allier, and for a few months in 1815, sub-prefect of Gannat; He obtained the name of Loisel de Douzon (letters patent of November 11, 1814), and was ennobled in 1815. His descendants still possess the property. The building is classified as historic monuments in 1973.

How To Get To Château de Douzon(Map):