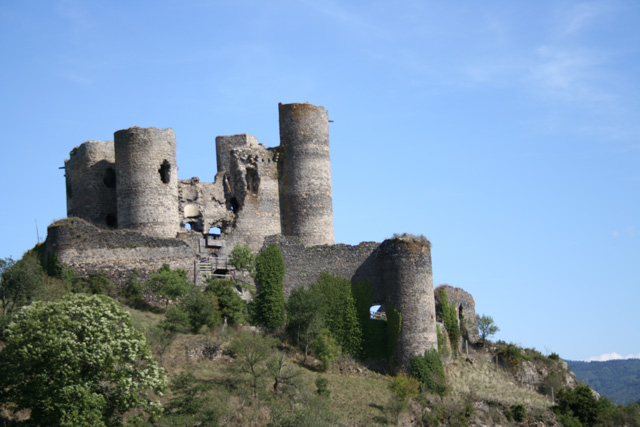 Location: Domeyrat, in the Haute-Loire departement of France (Auvergne Region).
Built: 12th-15th century.
Condition: Ruins.
Ownership / Access: General council of Haute-Loir.
Notes: Château de Domeyrat is a medieval castle in the town of Domeyrat in the department of Haute-Loire in France. It is a historical monument. The revolution requires significant changes. The field is split between three cities: Domeyrat, La Chomette Montclard and then offered for sale in batches from 1793 to 1795. Meanwhile, its dismantling takes place in 1794. The General Council of Haute-Loire redeemed the monument to different families; it is a historical monument since 30 December 19831. It is now managed and run by an association law of 1901, the Company 'And Arts ... So many! "At the request of the owner. This professional theater company has set up an interactive animation reviving the time of Philip Augustus in 1220. The castle of Domeyrat is a castle of the fifteenth century, the lower part could date back to the twelfth century. This is a dungeon-plan residence confined, consisting of a rectangular keep flanked at each corner by a round tower. The second chamber consisting of towers and curtain disappeared. Two towers retain vestiges of paintings, one decorated with hunting scenes, cupids and arabesques of the sixteenth century, the other religious scenes from the early seventeenth century1. Castle Domeyrat, accomplished example of "plan-residence confined dungeon" was the subject of an architectural history study published in the Cahiers de la Haute-Loire in 2007.

How To Get To Château de Domeyrat (Map):