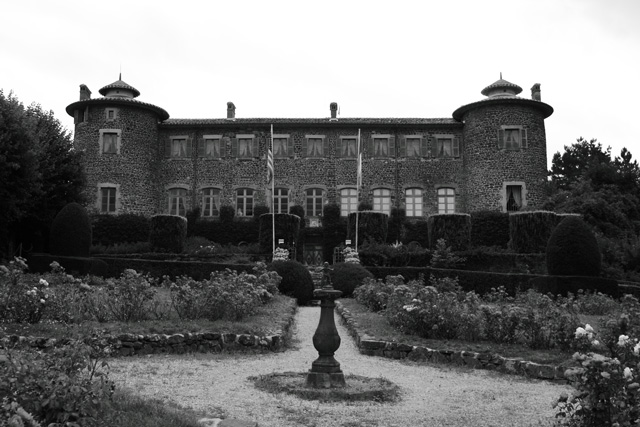 Location: Chavaniac-Lafayette, in the Haute-Loire departement of France (Auvergne Region).
Built: 14th century.
Condition: In good condition.
Ownership / Access: Now a museum.
Notes: Château de Chavaniac, strong-house in Chavaniac-Lafayette and 92 km southeast of Clermont-Ferrand, between Brioude (24 km) and Le Puy (30 km) (Haute-Loire) is the birthplace of Marquis de Lafayette. Following the death of John Moffat in 1966, the Franco-American association "Lafayette Memorial" continues the management of the castle and then transfer ownership in July 2009, the General Council of Haute-Loire, which in turn shows the administration of the castle and made redo the roof. The castle became Chavagniac-Lafayette castle houses the museum of the general, statesman and humanist Lafayette. The castle of Chavaniac, framed by two towers black stone d'Auvergne was built in the fourteenth century. The castle and its interiors were listed as historic monuments, August 21, 1989. Memorial Lafayette in 1916, despite his respect for the castle, has made more impressive by building the square tower, a sort of dungeon. The house includes a large staircase with wooden handrail, a gallery decorated with murals and a dining room Louis XIII, the guard room, the room echoed the Chinese wallpaper. On the first floor are the large living room, library, Cleves's room, the pink room, home room Lafayette, Adrienne room, the green room terraced and Florida room and apartment. On the second floor is the large shuttle race, Armand room, the Persian room on the third floor, the Gilbert room with a bathroom and a sauna. The hat box bedroom and living room of the Franco-American friendship are located in the fourth Floor4. The castle, for many of its elements, is the subject of a registration as a historic monument since August 12, 1989.