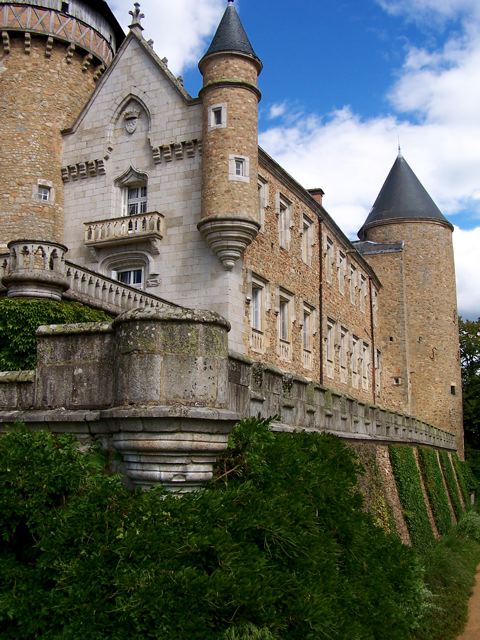 Location: Busset, in the Allier departement of France (Auvergne Region).
Built: End of 13th century.
Condition: In good condition.
Ownership / Access: Private property. Open to the public.
Notes: Château de Busset is a castle located on the town of Busset in the department of Allier in France. The gardens are enrolled in pre-inventory remarkable gardens and listed historical monument. Busset Castle was built in the late thirteenth century by the Lords of Vichy. The "big tower" that had to be the dungeon from medieval times, is still called the Tower Henri IV in memory of the visit of the Vert Galant his cousin César de Bourbon Busset in 1599. Fourteen generations of Bourbon-Busset have succeeded without interruption in this house since 1 January 1498, the date of the marriage contract of Marguerite de Tourzel Allegre who brought the lands of Busset to Pierre de Bourbon, Chamberlain of Louis XII, descendant Robert of Clermont, sixth son of Saint Louis. The site was registered July 31, 1945 and November 25, 1981 the ground floor of the main building, the second floor gallery serving the second main building and the former chapel in the tower of the prison were classified historic monument and the moat, the drawbridge, the gatehouse, the wing of the eighteenth century, the chapel, the gardens were registered June 11, 1990 and farm buildings overlooking the square of the castle September 15 1993.

How To Get To Château de Busset (Map):