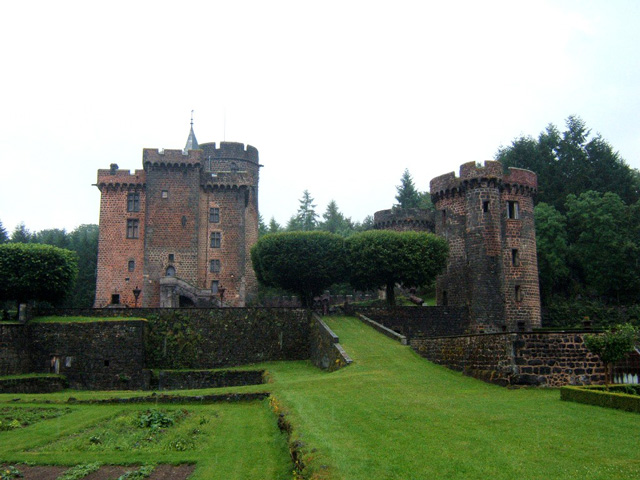 Location: Pontgibaud, in the Puy-de-Dôme departement of France (Auvergne Region).
Built: 12th century.
Condition: In good condition.
Ownership / Access: Current owner is Gabriel Germiny. The castle, the garden and the museum are open to visitors.
Notes: Château-Dauphin is a medieval fortress in the town of Pontgibaud Auvergne.It owes its name to the arms of the one who had it built at the end of the twelfth century: Robert I, Count of Auvergne, on weapons which included a dolphin. The initial construction is modified in the fifteenth century by Gilbert III Motier de Lafayette, which reinforces defenses and enlarged the dungeon. Abandoned in the seventeenth century for a more comfortable building, damaged during the French Revolution, the castle was finally restored at the end of the nineteenth century by the Count César III de Pontgibaud The castle is inhabited since 1756 by the same family after a musketeer of the King, Caesar I of Moreh. The current owners, Earl and Countess of Gabriel Germiny are its descendants. The castle, the garden and the museum are open to visitors.

How To Get To Château-Dauphin (Map):