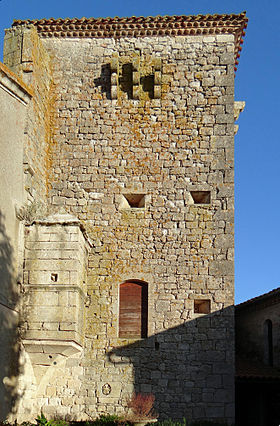 Location: Laugnac, in the Gironde departement of France (Aquitaine Region).
Built: 16th century.
Condition: Rebuilt.
Ownership / Access: Private person.
Notes: The tower of Laugnac is a square keep, the last vestige of the castle of Laugnac of the xiiie century, rebuilt in the fifteenth century or rebuilt in the sixteenth century, which stands on the town of Laugnac in the department of Lot-et-Garonne in New region -Aquitaine.A stronghold existed in Laugnac well before the fourteenth century to protect the priory and the village. Jean Burias writes that the castle existed in 1310. There is a Bernard de Laugnac, a squire of the seneschals of Agenais, who gives a receipt of his wages on 20 October 1339. A Revignan, Sieur de Lonhac gives a receipt on September 2, 1353. The Revignans, sirs of Laugnac, were to be dispossessed of the place following a quarrel with the lords of Montpezat. From this first period, for Georges Tholin. There remain some remains of the castle's enclosure, almost quadrangular. "In the center is still the recipe, an old supply store of the fifteenth century, not vaulted. Solid wall in beautiful medium device. Exterior staircase and door with broken hanger. Tower of the southeast corner square three-story, pierced with loopholes for firearms. Fireplaces of the fifteenth century. Cantilever quadrangular canopy. Modillons outside on the highest floor ". For Major Labouche, these buildings also have vestiges previous to the fifteenth century.