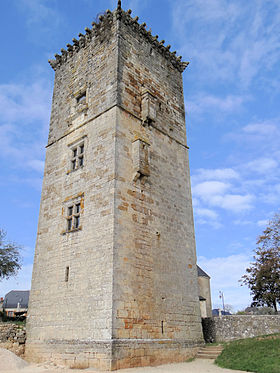 Location: Chavagnac, in the Lot-et-Garonne departement of France (Aquitaine Region).
Built: 12th century.
Condition: --.
Ownership / Access: Private property.
Notes: The Chavagnac tower is the vestige of a French castle located in the commune of Chavagnac, in the department of the Dordogne, in the region of New Aquitaine.The fourteenth-century watchtower is the only remaining part of a twelfth-century feudal castle which commanded the roads connecting Sarlat to Terrasson and Brive. The castle belonged to the chatel- lenie of Larche, and Terrasson, and depended on the seneschals of Sarlat. The castle was plundered by reisers in 1569, and the army of the Duke of Mayenne passed by Chavagnac in 1588. The castle, as well as a large part of the neighboring church, were destroyed before the Revolution by a fire . The tower crowned with machicolations, 25 meters high and nearly 8 meters wide, allows to have, on clear weather, a view, it is said, on seven departments. It was possible for him to communicate by signals with the tower of Yssandon and the castle of Noailles. The tower has three mullioned windows and two latrines (or two bretches). The castle belonged in the fifteenth century to the family of Roffignac de Chavagnac also called Roffignac de Cousages because this family owned this seigneury located in the present commune of Chasteaux, in Correze. Madeleine de Roffignac was married in 1573 with Jean de Sénectère. Their daughter Gabrielle married Gilbert de Chazeron and inherited Chavagnac. From this marriage Gabriel and Anne de Chazeron were born. This one marries François de Polignac and transmits the castle of Chavagnac to the family of Polignac for two generations. On July 26, 1619, Claude-Francoise de Polignac married Henri I of La Rochefoucauld6 and transmitted the seigniory of Chavagnac to the family of La Rochefoucauld-Cousages who kept it until the Revolution. The last lord was Alexandre Armand Louis Henry of La Rochefoucauld, born in 1767. The castle is listed as a historic monument on 21 July 1947.