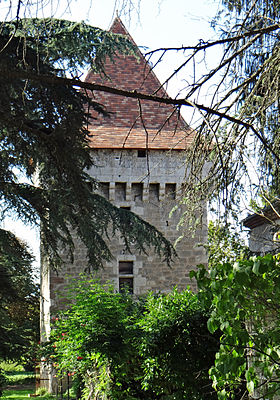 Location: Penne-d'Agenais, in the Gironde departement of France (Aquitaine Region).
Built: 15th century.
Condition: In good conditon.
Ownership / Access: Private property.
Notes: The Escoute tower is located in Penne-d'Agenais, Lot-et-Garonne.According to Lucile Bourrachot, the dam or "payssière" of Lestaque on the Lot had to be rebuilt in 1308. It is mentioned in 1311 in an inquiry made by Guillaume Cazes, Judge of Agen, at the request of the King of England . It is one of the eleven dams that were built on the Lot at the end of the 13th century at the request of the King of England in the bailiwick of Penne. To seize tolls, the local lords built fortified buildings nearby. It was known in the fifteenth century under the name of Escoute. It is then the possession of the families of Lustrac and Laduguie. As for other dam sites on the Lot, a seigneurial tower was built nearby to control it. The current Escoute tower dates from the mid-fifteenth century. It may have been rebuilt by Jean de Laduguie, described as "Sieur de la Tour de Lestanch" in 1482.The seigneury of Escoute is owned by the Labrunie family. The Labrunie d'Escoute were mentioned as early as the seventeenth century. They had to build the house that flanks the tower. The tower was pierced with a door on the ground floor in 1776, according to the date engraved on its clip. The house was enlarged and a wing in the back was built, probably for Pierre de Montalembert, nephew of Jean-Francois de La Brunie, Lord of Escoute, who seems to have inherited the noble house after 1777, date of His marriage to the castle of Rodier with Marie Thérèse de Barrail. A description of the noble house can be found in the record of the revolutionary seizure of its possessions. It is described as a "four-bedroom house up, two antechambers and corridor, kitchen downstairs, cellar, chay and stable,garden, bower and roe." The layout of this house has changed little in relation to what can be seen on the cadastral plan of 1830. The property is then owned by the brothers Bonnefoux de Penne. The tower was listed as a historic monument on January 10, 1964.