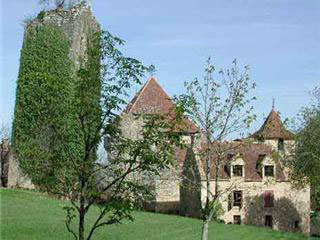 Location: Thonac, in the Dordogne departement of France (Aquitaine Region).
Built: 12th century.
Condition: In good condition..
Ownership / Access: Private property.
Notes: The manor and leaning tower of Vermondie constitute a group of buildings located on the commune of Thonac, on the border of the commune of Saint-Léon-sur-Vézère, in the French department of the Dordogne, a few kilometers from the cave of Lascaux. The tower is listed as historical monuments.Built on top of a hill near the Vézère, this place is characterized by the fact that there are, side by side, a Gallo-Roman tower and a small manor whose origin is uncertain but which presents the traces Of major structural changes over the centuries, from the twelfth century - or even before - to recent times. At different periods in its history, the manor was actually a more important castle because the noble family of the place controlled a vast territory reaching the lands of Fanlac where Jacquou le Croquant was born, including Château d'Auberoche3 and Castle of the Sablou.The manor proper has the particularity that in its cellar, half a height of the descent of a circular well, there is the start of a network of underground hollows dug partly in the rock. Despite the landslides that completely block them, we clearly distinguish the primer of three conduits starting in fan. One of them obviously points towards the tower, the other two seem to be oriented towards the surrounding fields, perhaps to serve as means of escape or counter-attack in the back of the assailants in the event of a siege of the main building .