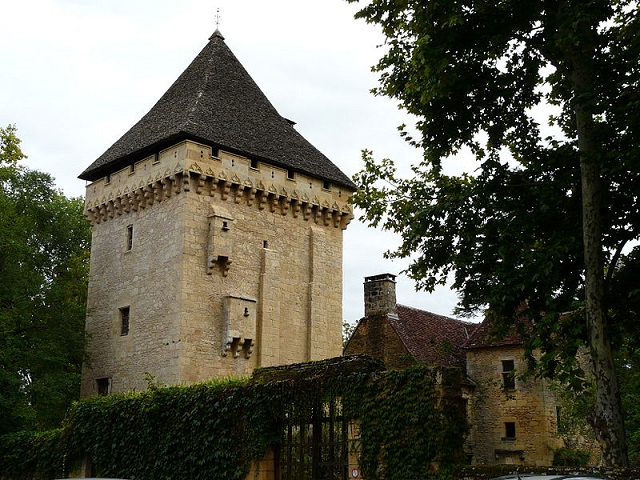 Location: Périgord noir, in the Gironde departement of France (Aquitaine Region).
Built: 15th century.
Condition: --.
Ownership / Access: --.
Notes: The Manoir de la Salle is a French building located in Périgord Noir, in the commune of Saint-Léon-sur-Vézère, in the Dordogne, in the Aquitaine-Limousin-Poitou-Charentes region.Comprising a manor house and a square keep with a corner tower, Manoir de la Salle is located in the village of Saint-Léon-sur-Vézère, in the Dordogne department.The square tower was built in the fourteenth century. It is docked by a penetrating turret which contains a spiral staircase. It is crowned with machicolations supporting the path of round. It has a roof with four sides in slates supported by an original frame. Some revisions were made in the eighteenth century. In the fifteenth century was built a separate manor with its lodgings arranged in square and a tower placed in the returning corner. In the fourteenth and fifteenth centuries, the fief belonged to the family of Mârtres. It was preserved until the sixteenth century when members of the family took part in the defense of Sarlat against the Huguenots. Then the fief passed into the hands of the Vivans family before it became the property of the Cheylard family by marriage in 1630.