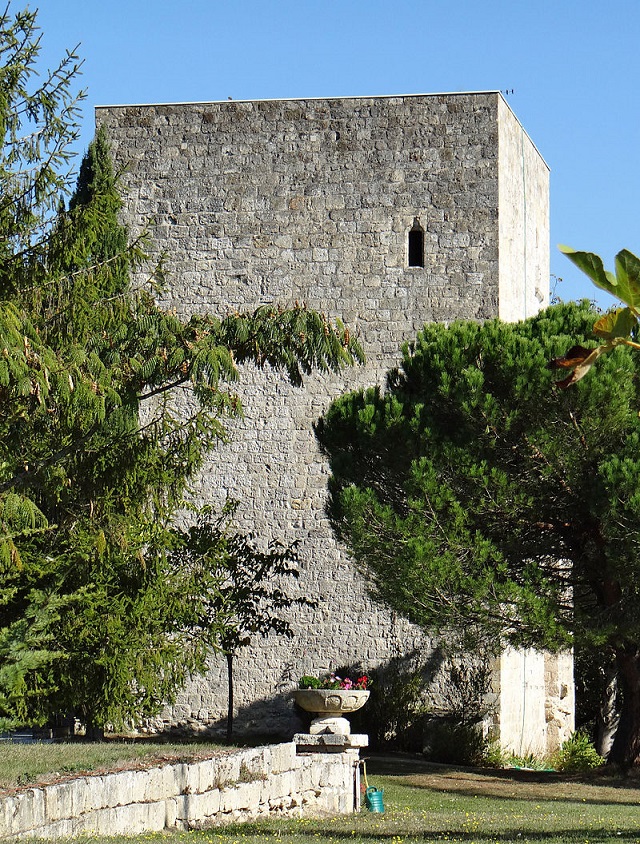 Location: La Croix-Blanche, in the Gironde departement of France (Aquitaine Region).
Built: 1300.
Condition: --.
Ownership / Access: --.
Notes: The Fauguerolles dungeon is located in Fauguerolles on the territory of the commune of La Croix-Blanche, in the department of Lot-et-Garonne and the region of New Aquitaine.The castle was built on the ancient Roman road linking Agen, Eysses and Périgueux by a family which held the fief in coseigneurerie. In 1259, the brothers Arnaud and Gaufred pay tribute to the castrum of Falgairolas. He was confiscated a few years later by the King of England who gave it to Guillaume Montravel. The castrum was originally a fortified village. The seigneury of Fauguerolles has been divided among several co-nursers: the Fauguerolles, the Durfort, the Montpezat-Laugnac, the Sarrau-d'Arasse, the Chazeron, the Rovignan, the Monfabes, the Leguet, the Du Bernet and Esparbès de Carbonneau, the de Nort, the de Galibert, the Hugon de Latour, the de Raigniac. The tower stands a few meters from the village of Fauguerolles and must not have been part of the castrum. Although there is no document concerning the construction of the tower, its architecture seems to date from the end of the thirteenth century or the beginning of the fourteenth century. It had to be modified later to make it habitable, at a time when Jean de Monfabes lived in the castle of Fauguerolles (1376), unless it was Bertrand de Fauguerolles who lived at the same time. Most of the compound and the buildings that completed this small house had to disappear after 1592 because on that date the garrison was warned to be on its guard. At the beginning of the eighteenth century he had to remain only the tower, for when the property of the Comte de Laugnac was seized in 1715, the judges of the Requests of the Palais de Paris ordered repair work on various seized property , Including Fauguerolles. The estimate of the work to be done by Pierre Richefort, Jean Dubenqua and Michel Martin, mason, carpenter and roofer, makes it possible to realize that there were already no floors and that it is covered by a Roofing. There was still a chapel next to it that was to be dedicated to Notre-Dame. In the nineteenth century, the old tower belonged to the family of Galibert. The donjon of Fauguerolles was awarded the Demeures et Châteaux du Soleil prize by the association Vieilles maisons françaises in 1989. The castle was listed as a historic monument in 1950.The castle of Fauguerolles consists of a quadrangular tower of three floors not vaulted. Two of its corners are reinforced by buttresses. The front door of the ground floor is with broken hanger on the north side. The room on the ground floor is lit only by the door and two loopholes. The interior plan dimensions are 6.40 m. By 7.50 m. The thickness of the walls is 1.20 m. You can not see the access to the first floor, perhaps by a wooden staircase or by the castle that has disappeared. Only the first floor had to be habitable. The second and third floors are not remarkable. It can be seen that the tower was connected to another building on the opposite side to the buttresses. A geminated window was probably rebuilt in the fifteenth century.