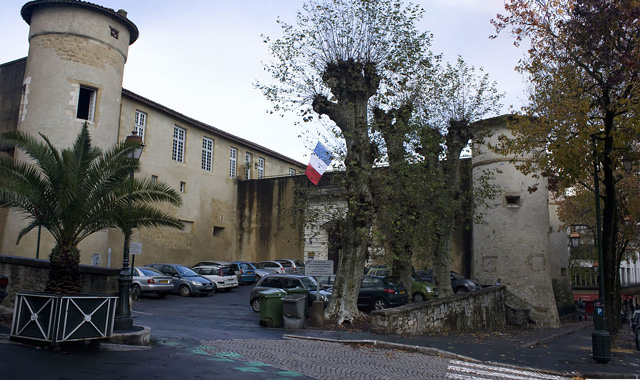 Location: Bayonne, in the Pyrénées-Atlantiques departement of France (Aquitaine Region).
Built: 12th, 17th century.
Condition: Ruined.
Ownership / Access: State property.
ISMH Reference Number: PA00084332
Notes: Château-Vieux is a medieval fortress located in Bayonne, city of the Aquitaine region of France. Le Château Vieux is built on the edge of the site of a Roman castrum that housed the garrison and the administration of the region named "Lapurdum". From the late eleventh century, the viscounts of Labourd are building a fortress that is based on three Roman towers powerfully strengthened. It takes the name of Vieux-Château in the late fifteenth century, after the construction of a new castle, said new castle, in the area of ​​Petit-Bayonne. In the seventeenth century on the orders of Vauban undertaking fortifying the place, the castle became the Northwest fulcrum. Le Donjon is destroyed, and we add a walled forecourt. There will be spared the changes later Vauban fortifications system. It is also a historical monument by decree of November 7, 1931. Château Vieux, property of the Army, has always been the seat of the military authorities of the city, which hosts the first R.P.Ma.

How To Get To Château-Vieux (Map):