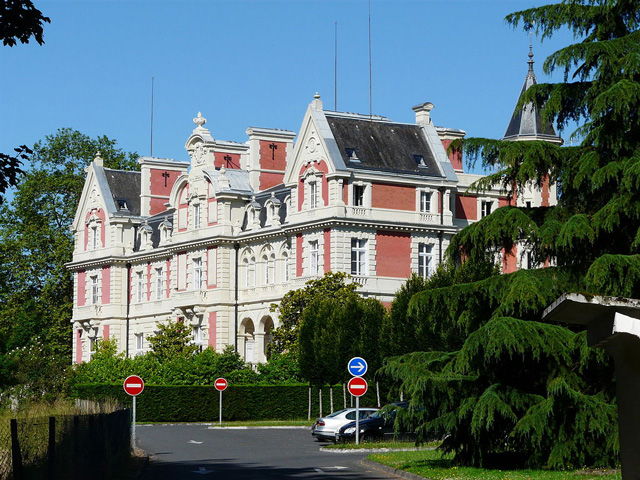 Location: Trélissac, in the Lot-et-Garonne departement of France (Aquitaine Region).
Built: 19th century.
Condition: In good condition.
Ownership / Access: Private property.
ISMH Reference Number: PA24000044
Notes: Château Magne or Castle Trélissac, is a French château located in the municipality of Trélissac in the Dordogne, in the Aquitaine region. It is under protection as historical monuments. Mani Castle is located in the town of Trélissac in the center of Dordogne, in central Perigord, four kilometers west of Périgueux, and about 600 meters south-west of the town of Trélissac, north of 'Isle of the greenway that runs along the. This is private property. The castle is located in a park where there are also the old (or small) Trélissac Castle and the ruins of the old Gothic church. Built in brick and stone in the Second Empire style, but with inspirations from the Renaissance, the castle is in the form of a top body of northeast oriented rectangular logis3 / southwest, flanked by two pavilions each flanked a polygonal tower, the northern and western ends. In 2001, the castle was purchased by an individual, who already owns the Chateau de la Roche, in Annesse-et-Beaulieu, west of Perigueux. Mani castle is listed as historical monuments November 29, 2004. In 2005, a developer bought the landscape and then there twenty-four luxury apartments, from F2 to F4, most of which are leased.