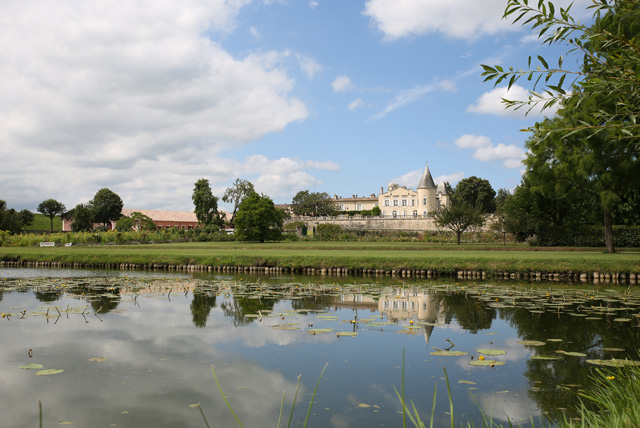 Location: Pauillac, in the Gironde departement of France (Aquitaine Region).
Built: 18th century.
Condition: In good condition.
Ownership / Access: Vineyard.
ISMH Reference Number: PA00083885
Notes: The Chateau Lafite Rothschild is a Médoc winery with an area of ​​178 hectares, including 103 hectares of vineyards, located in the commune of Pauillac benefiting from the AOC of the same name. He produced one of Bordeaux's most prestigious and famous in the world. The Chateau Lafite Rothschild is a "premier grand cru" according to the official classification of Bordeaux wines of 1855. It shares this rare distinction with castles Margaux, Latour, Mouton Rothschild and Haut-Brion. The castle is the subject of a registration as a historic monument since 22 November 1989. The vineyard of 114 ha is divided into three parcels: the slopes surrounding the castle, the plateau of Carruades located west and parcel of 4.5 ha in the neighboring commune of Saint-Estèphe. Most of the land consists of deep fine gravel mixed with aeolian sand on a limestone base of the service. The grape varieties are made up of 71% Cabernet Sauvignon, 25% Merlot, 3% Cabernet Franc and 1% Petit Verdot. The average age of the vines of the great wine is 40, 20 ha of young vines (under 10 years) being used for the development of the second wine. There are also patches of extremely elderly over 80 years, one called "The Gravel" even dating back to 1886. The prices of Château Lafite Rothschild wines are among the highest in the Bordeaux region since 2009 and have experienced significant inflation linked including the development of the Chinese market. They range from 700/800 euros for less popular vintages like 1958, 1968, 1992 or 1997 to several thousand or even tens of thousands of euros for large older vintages commencing as early as the time of the French Revolution. The Château Lafite Rothschild has been rated 100/100 by Robert Parker for vintages 1986, 1996, 2003 and 2010.

How To Get To Chateau Lafite Rothschild (Map):