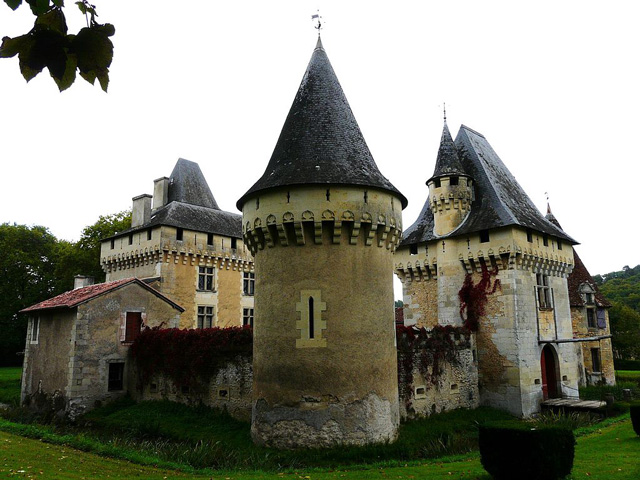 Location: Boulazac, in the Dordogne departement of France (Aquitaine Region).
Built: 14th-15th century.
Condition: Ruined.
Ownership / Access: Privately owned.
ISMH Reference Number: PA00082389
Notes: Château du Lieu-Dieu is a French château located in the municipality of Boulazac in Dordogne, in the Aquitaine region. The castle of the Lieu-Dieu is located in the center of Dordogne, less than a kilometer south of the Old Town Boulazac along and slightly below the 6089 provincial road (the old national road 89). It was built in the fourteenth and fifteenth centuries, with nineteenth-century modifications. Baconnie originally called, took its final name after the holy sacraments of the surrounding churches were brought to the tabernacle of the chapel. Indeed, this measure was taken to prevent the desecration of the body of Christ present in the hosts, bands of English mercenaries ravaging the country in the last days of the Hundred Years War. So it is the locals who called in dialect "Lioc-Dioc". The procession of Corpus Christi was effected in the village church located one kilometer away to the castle and, until the 1960s. The castle is surrounded by a moat fed by the Manoire, stream on the left bank of which it is built on the other side of which is located dovecote. It comes in the form of a quadrilateral whose corners are located at the four cardinal points, those in the east and south are provided with a circular tower. Northwest stands the main building, three levels high and topped with a defense room. The northeast and southwest sides match common. Access to the castle southeast by a gatehouse that precedes a drawbridge. It is a listed building since April 30, 1959 for facades, roofing, moats and dovecote. This castle has the distinction of having always belonged to the same family since its construction, although the various owners do not always have the same name.

How To Get To Château du Lieu-Dieu (Map):