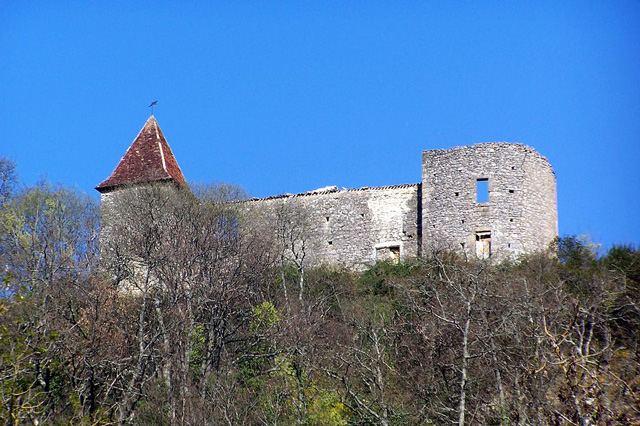 Location: Loupiac, Gironde departement of France (Aquitaine Region).
Built: 19th century.
Condition: Ruins.
Ownership / Access: Owned by a Private Company.
ISMH Reference Number: PA00125241
Notes: Château du Cros is a ruined fortress in the town of Loupiac in the department of Gironde, France.The castle built between the late nineteenth century and the middle of the fourteenth, there is only still covered tower (restored in 1993), a headless tower, a house dating from the seventeenth century, and remains of walls. Rehabilitation works are course. The building was listed in the inventory of historical monuments by order of 31 December 19933. This is originally a Romanesque castle, as suggested by the start of construction, in 1155, as evidenced by the Cartulary of the Sauve-Majeure. Rethought and redesigned over time, the overall plan that is presented to us is between the fourteenth century and the seventeenth century. Its dominant position on a rocky outcrop, was obviously chosen both for a defensive reason, since the castle was built for military reasons but also for reasons of monitoring river traffic. During the Hundred Years War, the castle of Cros stayed in the English camp, his defenders fiercely pushing the lords of Benauge. He passed from family to family over the centuries, but was continuously inhabited until the Second World War. This would be fatal. Indeed, the German army requisitioned the first for its ideal point of view, but also served as a shooting target to train his soldiers. occupation forces completed it with explosives just before retiring. Under these conditions, at the end of the war, the castle was abandoned. Since no roof to protect it, and thank you to the bad weather, theft and vandalism, the site deteriorated rapidly and assumed the aspect that we know today.