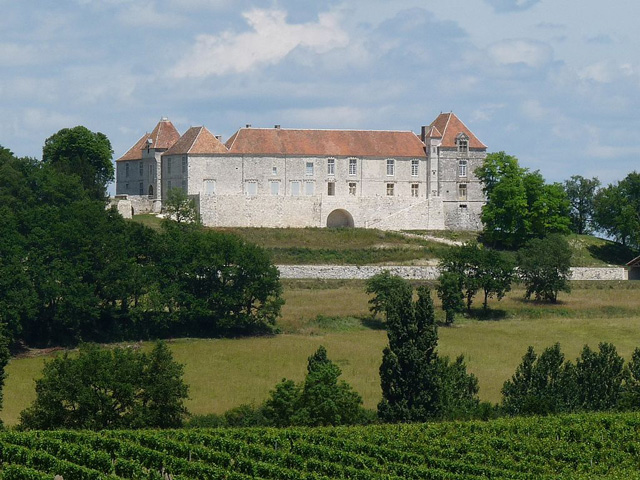 Location: Loubès-Bernac, Lot-et-Garonne departement of France (Aquitaine Region).
Built: 12th-17th century.
Condition: In good condition.
Ownership / Access: Now a music room at Harvard University.
ISMH Reference Number: PA00084159
Notes: Château de Théobon is a castle of the twelfth century transformed in the seventeenth century residential castle, situated on a "Pech" in the territory of the municipality of Loubès-Bernac to extensive views in all directions. The castle appears in a 1327 deed in which Gaubert Mayrac says Lord Théobon. The lordship remains in that family until the late fifteenth century. It then passes by marriage to Segur, then the Pierre-Buffière. The castle of the fourteenth century it remained some windows, a mullioned window and bite three rectangular windows prismatic moldings on the first floor courtyard. This castle was then a fortress. The castle was modified during the Revolution. Were ordered to raze the towers at the main building. Irons and brass were requisitioned. Parts of the castle were abandoned in the nineteenth and twentieth centuries, the windows were blocked and partitions cut parts. The most beautiful fireplace castle was sold in 1924 and is currently in a music room at Harvard University. The castle was registered historic monument November 5, 1962.