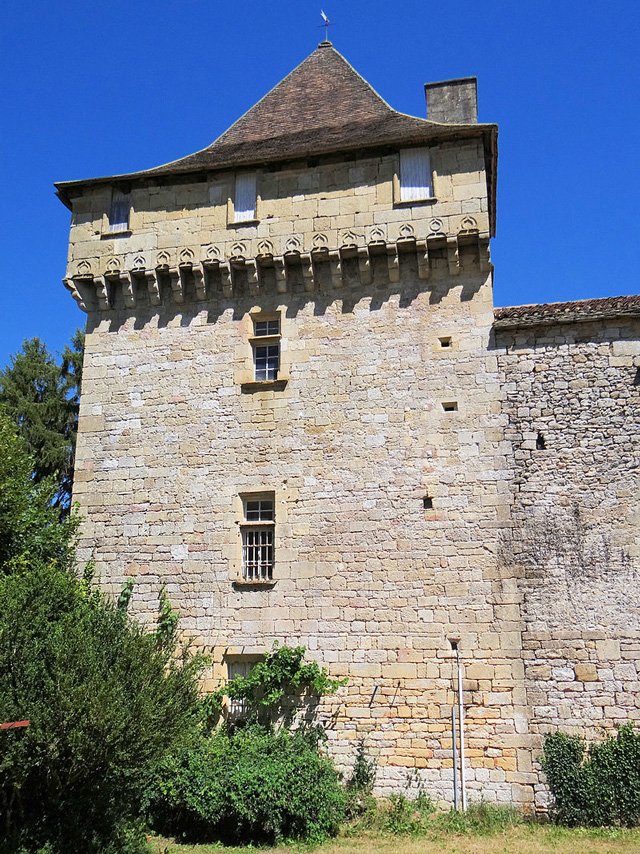 Location: Saint-Pompont, in the Dordogne departement of France (Aquitaine Region).
Built: 16th century.
Condition: Ruined.
Ownership / Access: Privately owned.
ISMH Reference Number: PA00082894
Notes: Château de Saint-Pompont or St. Pompon is a French château located in the village of Saint-Pompont in the Dordogne, in the Aquitaine region.In 1269 a text indicates a Hospitalis Sancta Pomponia that probably belonged to the Hospital of St. John of Jerusalem. The place was first called San Plainpon. The castle has a large square tower with battlements and ramparts rebuilt after the end of the Hundred Years War. The home is set against the tower of the fifteenth century and has mullioned windows. In the fifteenth century the lordship of Saint-Pompont belongs to the Laroque family or La Roque Saint-Pompont. In 1464, Marguerite de La Roque, Martial sister La Roque, Lord of Saint-Pompont, married John II of Cugnac1,2, Lord of Sermet (in Loubejac) Giverzac (near Domme), La Bastide (Lot ) The Thèze. John III of Cugnac (born 1520) is to Helie de La Roque donation of Saint-Pompont by instrument in 1552, The Peyruzel, The Fournels in Campagnac-lès-Quercy. Family Cugnac remained lord of Saint-Pompont until the Revolution. In 1589 the Protestants took over Saint-Pompont including Marc Cugnac the lord. After settling in the church, they are hunted by the Leaguers. Geoffroy Vivans back the next day and butchered 35 Leaguers burns Marc Castle Cugnac except donjon3. The castle was registered as historical monuments February 2, 1948.