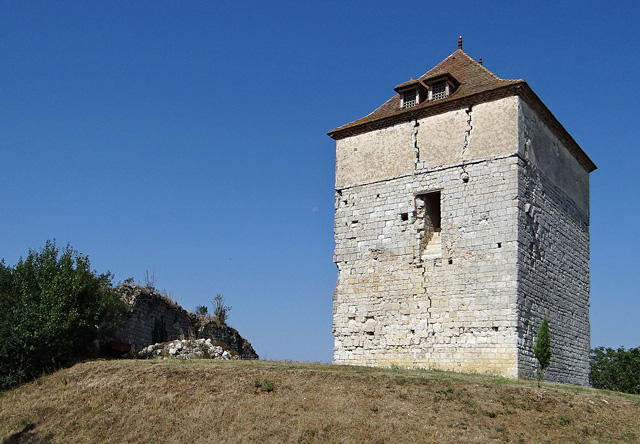 Location: Roquefort, in the Lot-et-Garonne departement of France (Aquitaine Region).
Built: 18th century.
Condition: Ruined.
Ownership / Access: Private property.
ISMH Reference Number: PA47000052
Notes: Château de Roquefort is located on the territory of the town of Roquefort, in the department of Lot-et-Garonne and the Aquitaine region.The Roquefort castle was probably built in the eighteenth century, although it is not mentioned in the tribute acts of 1256 and 1281, nor in the saisimentum of 1271, or early fourteenth. This castle has no history. It has a triple enclosure for encompassing the end of a hillside. The square tower seems to have been reduced to half its height. We see in the curtains a wide breach, roughly bite with bricks. It is possible that Roquefort was taken and was disbanded shortly after its construction. October 30, 1562, Jeanne d'Albret, Queen of Navarre, and Viscountess Bruilhois sells perpetual redemption pact Secondat Jean II (1515-1599), Lord of Roques, the lordships of Roquefort, Sérignac, Montesquieu, Ségougnac , Plaichac, Goulard and Cuq in the book of faith and hommage2. These seven land had previously been confiscated Stone Secondat father said Jean. The castle is now in ruines3. Henri de Bourbon, King of Navarre says in a note of December 19, 1576 the sale of 30 October 1562. By the same act, it sells, assigns and conveys perpetual audit of Jean Secondat of redemption for $ 14 000. Gaston Secondat (12 April 1625-1693), grand-son of Jean II Secondat, Lord of The Roques and Fleyte, Baron de Roquefort, held at the font by Gaston d'Orleans, brother of Louis XIII, and Sérène Durfort, marièée Charles I of Montpezat4. Montesquieu's daughter, Denise Secondat (1727-1800), was married by her father to a cousin, Geoffrey of Secondat Roquefort Roques (1702-1774), grand-son of Gaston Secondat. The wedding took place in Clairac 25 March 1745. The groom was 42 years old, married, 24 years younger. Denise, widowed in 1774, lived in Agen, in hotel Secondat Roques of St. Antoine Street, at the corner of the street Londrade. Secondat family retained the castle until the late eighteenth century. Castle Roquefort, including the tower-room, home, and public speaker, was listed as historical monuments September 18, 2001.

How To Get To Château de Roquefort (Map):