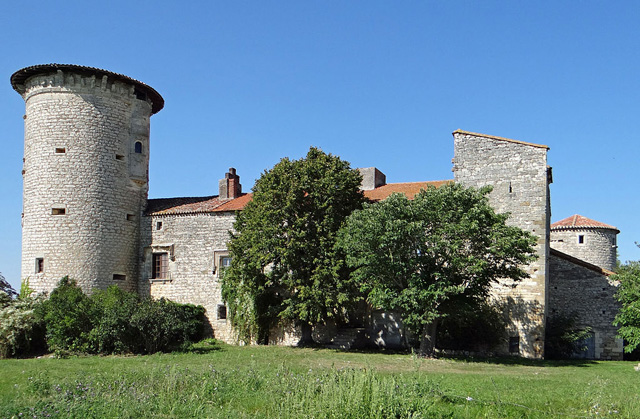 Location: Montayral, in the Lot-et-Garonne departement of France (Aquitaine Region).
Built: 16th century.
Condition: In good condition.
Ownership / Access: Privately owned.
ISMH Reference Number: PA00084188
Notes: Château de Perricard is located on the territory of the town of Montayral, in the French department of Lot-et-Garonne in the Aquitaine region. The documents to monitor the construction of the castle are almost nonexistent. The general plan of the castle was a square building with four main buildings around a courtyard flanked by towers. The construction probably began in the late fifteenth century or early sixteenth century by Armand I de Raffin. The southeast rectangular tower is the oldest part and was part of a fortified house médiévale7. An inscription, now lost, gave the date of 1565 and attributed the end of construction of the castle of Antoine Raffin, in particular the realization of the big south-west tower and the rich décor visible around windows - écotés sticks , roses, lilies, etc. - and the main door. This is probably a one embodiment of a Cahors workshop. Anne Bezolles has built in the east wing of the castle chapel, 1610. A description was made in the inspection report after the passage of the Bishop of Agen Claude Joli, in 1667. After the purchase of the castle by Francis Laffargue, it is converted into farm and divided into two properties. The wing is enlarged, is converted into stable barn in 1861. The west wing is partially ruined. She was given a new front in the second half of the nineteenth century to allow his farm processing. The south wing is the best preserved with large kitchen, bedrooms upstairs, one with a painted ceiling and two massive fireplaces. Castle Perricard was listed historical monument February 22, 1927.

How To Get To Château de Perricard (Map):