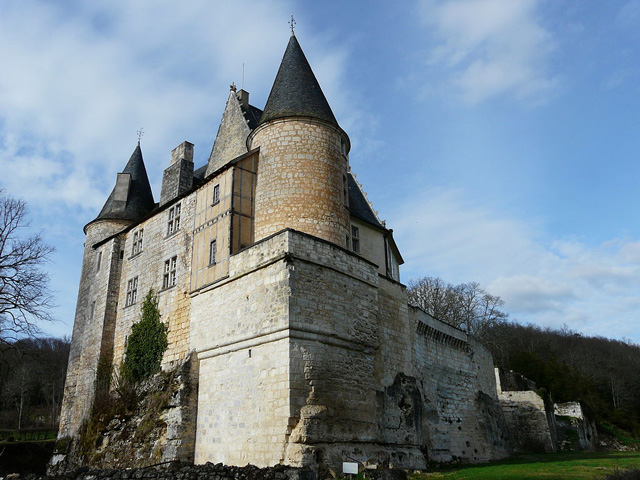 Location: Lamonzie-Montastruc, in the Dordogne departement of France (Aquitaine Region).
Built: 13th century.
Condition: Ruined.
Ownership / Access: Private property.
ISMH Reference Number: PA00082601
Notes: Château de Montastruc is a French château located in the municipality of Lamonzie-Montastruc in the Dordogne, in the Aquitaine region. It was built in the thirteenth century and modified in the fifteenth and eighteenth centuries. The site was inhabited since ancient times. The castle was built on a rock, with their prehistoric cave dwellings. Medieval castle overlooking the rock. The original castle, razed in 1438, was rebuilt in 1475. In 1568, he was besieged by Blaise Monluc. The amenities of the eighteenth century are embedded in the frame of the feudal house. The interiors dating from the eighteenth century. During World War II, the castle hosts some time the Grand Duchess Charlotte of Luxembourg, following his exile against the advancing German troops. The park was redeveloped in the nineteenth century. The Montastruc Castle is Purple Périgord, south of the Dordogne, 100 meters west of the main road 21. It is on a rock northwest of the village of Lamonzie-Montastruc, near the Caudeau. This is private property. partially listed building in 1973, he is in full since 2001.