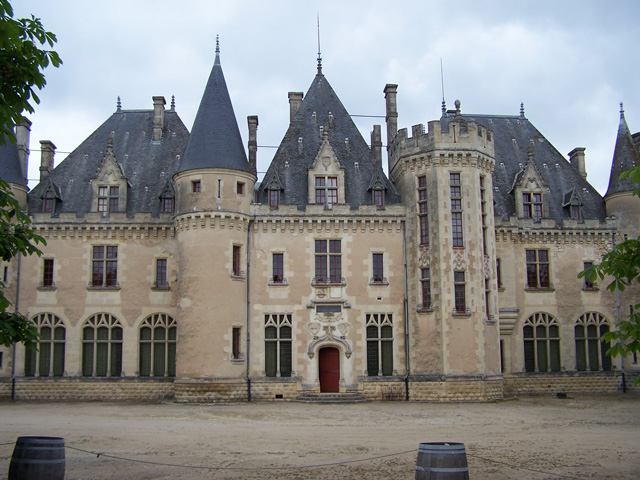 The western façade and the inner court - Henry SALOMÉ - Wikipedia - lic. under GFDL 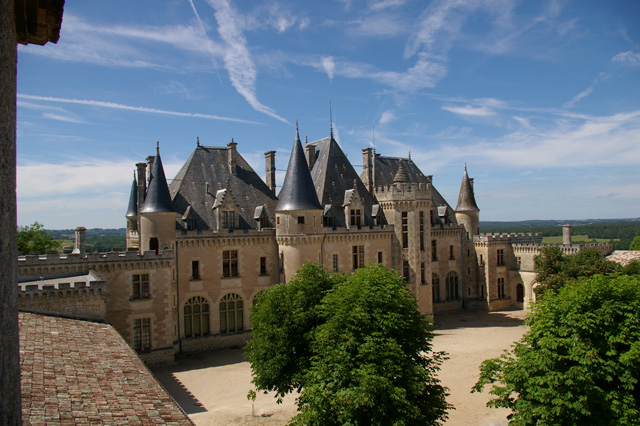 Location: Saint-Michel-de-Montaigne, in the Dordogne departement of France (Aquitaine Region).
Built: 14th century.
Condition: In january 1885, a fire destroyed the castle and was rebuilt in neo-Renaissance style.
Ownership / Access: Privately owned.
ISMH Reference Number: PA00082876
Notes: The Château de Montaigne is a castle situated on the borders of Périgord and Bordelais, near Bergerac and Saint-Émilion, in the small commune of Saint-Michel-de-Montaigne in the Dordogne département of France. This fortified castle dates to the 14th century and was the family residence of the Renaissance philosopher and thinker Michel de Montaigne.In 1860, Pierre Magne, minister of Napoleon III, bought the castle. He withdrew there after the 16 May 1877 crisis and became generally distant from the meetings of the Senate. He died of disease on 17 February 1879. The castle was completely restored after a fire that seriously damaged it in 1885.The architecture has a neo-renaissance flavour. After crossing the gate, one arrives in a square court surrounded by ramparts. The round tower of the library is the only vestige of the 16th century and is a popular location for visitors of the castle. It is said that Michel de Montaigne composed his Essays here. Since 2009, Château de Montaigne has been listed as a monument historique by the French Ministry of Culture.