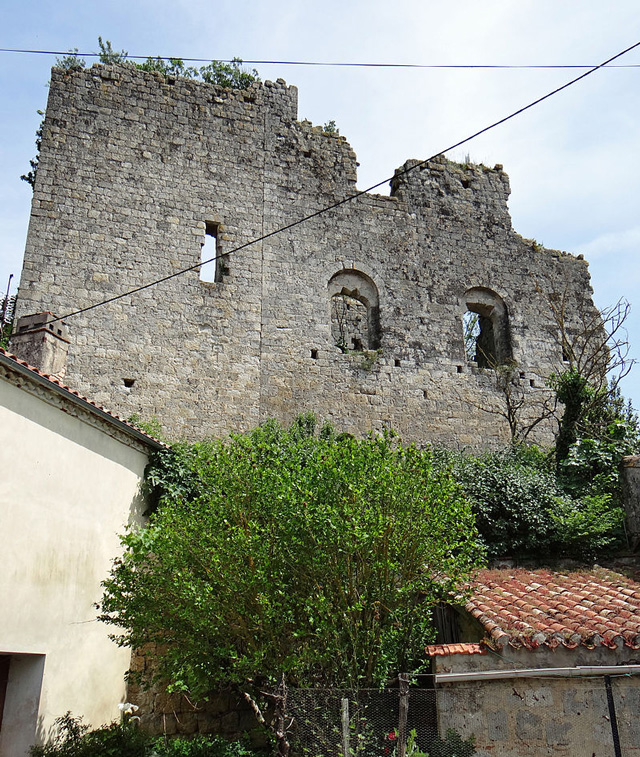 Location: Mongaillard, in the Lot-et-Garonne departement of France (Aquitaine Region).
Built: 13th century.
Condition: Ruins.
Ownership / Access: Privately owned.
ISMH Reference Number: PA00084181
Notes: Château de Mongaillard is located in the territory of the municipality of Mongaillard, in the department of Lot-et-Garonne. The castle dominates the road between Xaintrailles in Vianne. In homage to 1259, three families have properties Mongaillard, those Astaffort, Padern and Gontaud. The castle has a homogeneous Romanesque structure. Charles Higounet the date of the twelfth century but Jacques Gardelles noted that these shapes are visible in the thirteenth century in the Southwest constructions, for example, in the tower of Barbastre. Vianne de Gontaut-Biron, Gontaut Vital girl who had sworn fealty to King Louis IX in 1243 in possession of the castle Mongaillard. She gave part of the fief of Mongaillard she owned to her nephew, Isle Jourdain, in 1275. Vianne Gontaut-Biron died February 21, 1281 in a small house she had made in building the Dominican monastery of Condom she had financed the building in 1261. in 1287, he paid tribute to the castle Mongaillard the king of England Edward I. At that time, the stronghold of Mongaillard is shared with Bernard Saint-Loup, Antoine de Pouy and Guillaume Arnaud Padern, but only Jordan Isle is the host service for Mongaillard. The castle was registered as a historical monument January 7, 1926.