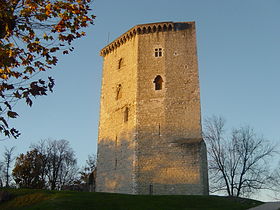 Location: Orthez, in the Gironde departement of France (Aquitaine Region).
Built: 13th century.
Condition: --.
Ownership / Access: --.
Notes: Moncade Castle is located on Moncade Street in Orthez, in the French department of Pyrénées-Atlantiques.In the thirteenth century, the viscounty of Béarn belonged to the family of Catalan origin of the Moncada. Gaston VII Moncada, son of William II of Béarn, lord of Moncade and Castelviel in Catalonia and Vicomte de Béarn, will distort his ties of vassalage with the kings of Aragon by taking an interest in the development of his viscounty of Béarn. It moves the capital of the viscount of Morlaàs to Orthez and approaches the kings of England who own the Guyenne. It is with his mother, Garsende de Provence, who is his guardian in 1238 and 1240, that this rapprochement will begin. It brings to the viscounts financial advantages in the form of pensions. Pierre de Marca indicates that Gaston VII made allegiance and swore an oath of fidelity to the King of England Henry III in 1242. According to this author, it is the subsidies that Gaston VII would have received on this occasion that would have allowed the construction of the tower . The texts of this period on the castle are almost non-existent. In 1256, a text indicates the "noble castle" of Orthez. The first certain date for the castle of Orthez is 1273: Gaston VII pawns the castle and the city of Orthez. In 1289 the King of England stayed at the castle. After the marriage in 1267 of Marguerite de Moncade with Roger-Bernard III, count of Foix, the Viscount of Béarn is administered by the family of Foix-Béarn from Gaston.

How To Get To Château de Moncade (Map):