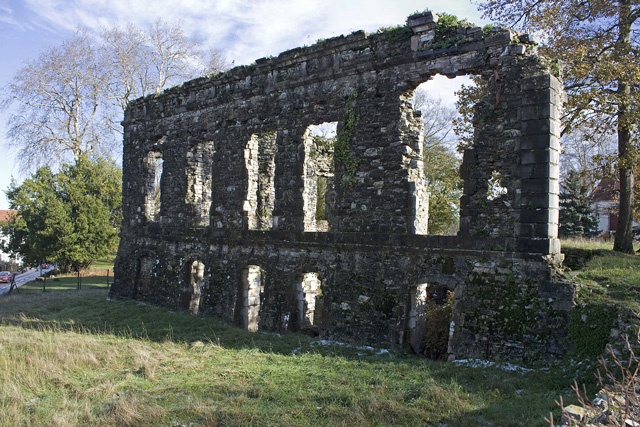 Location: Bayonne, in the Pyrénées-Atlantiques departement of France (Aquitaine Region).
Built: 18th century.
Condition: Ruined.
Ownership / Access: Bayonne.
ISMH Reference Number: PA00084330
Notes: Château de Marracq is a castle of the eighteenth century located in the town of Bayonne, in the French department of Pyrenees-Atlantiques. Today in ruins, it is the subject of a classification as historical monuments since 27 September 1907. Since 2012, the ruins are under renovation as there was a risk of collapse and accelerated erosion because there is no roof. The walls were washed, keystones and the repair or replacement stones. The landscaping and security are ongoing. It was built in the early eighteenth century by Maria Anna of Neuburg, Queen of Spain in exile, but never actually lived, preferring his home in Saint-Michel. Napoleon, after purchasing 19 May 1808 on his personal cassette of brothers Aaron (1758-1827) and Abraham (1773-1840) Marqfoy4, stayed there and made it one of its imperial palaces. During his stay in Bayonne, he had refused to settle in the Old Castle, preferring comfortable this house. It is also here that was signed the abdication of the Spanish Bourbons in 1808 in favor of Napoleon I, who installed his brother Joseph Bonaparte on the throne. At the Restoration, Marracq remains unoccupied. The army moved there in 1823, but the castle was ravaged by fire in 18256. Today it is a listed building, which belongs to the city of Bayonne. Northeast of the castle lies the Marracq college.