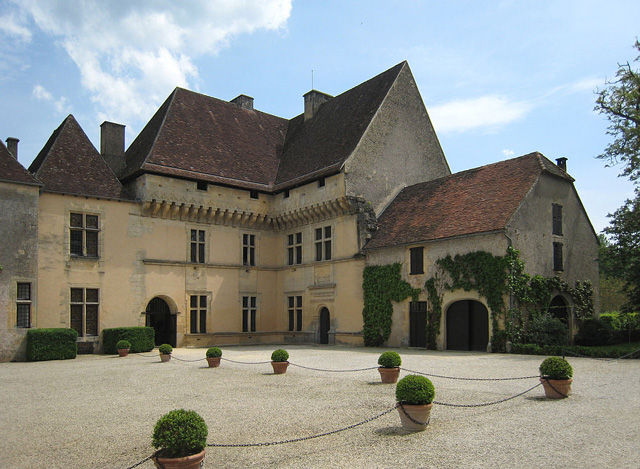 Location: Périgord, in the Dordogne departement of France (Aquitaine Region).
Built: 16th, 17th century.
Condition: In good condition.
Ownership / Access: Owned by a Private Company.
ISMH Reference Number: PA00083019
Notes: The Château de Losse and its gardens have been listed as French Historical House and Site since 1928. They are located in Périgord, Dordogne district, South-West of France, near the Lascaux pre-historic caves, on the Vézère river. The medieval fortress overlooks the Vézère river. In 1575 a Renaissance Hall was built within the stronghold. It is enclosed by curtain walls and surrounded by a deep ditch. Inside the décor and the period furnishings bear witness to the grand lifestyle of the Marquess Jean II de Losse in the 16th century. Such as we see it today it has remained unaltered since the 16th century, save for the wear of time. It was therefore listed as an Historical Monument in 1928. Its sole access is by the bridge over the moat and through a fortified gatehouse (the largest of its kind in France). In the courtyard, the façade of the Hall (1576) is an example of Renaissance architecture. Its characteristic features are carved in the golden stone of Périgord. On the riverside the grandiose terrace built on the cliff offers a view down the Vézère valley. The grand staircase with stone ornaments leads to rooms with sculpted mantelpieces. In the hornbeam ‘green chambers’ as they were designed in the 17th century, the labyrinthine walk windows open onto the castle and the flower beds. Upon reaching the river the balcony, dating back to the 16th century, allows a view downstream.