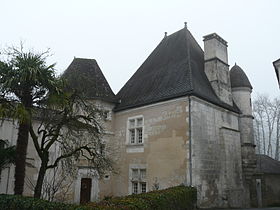 Location: Celles, in the Lot-et-Garonne departement of France (Aquitaine Region).
Built: 14th century.
Condition: In good condition.
Ownership / Access: Famille Montardy.
Notes: The castle of Lascoux, or castle of Celles, is a French castle located in the commune of Celles in the department of Dordogne, in Aquitaine-Limousin-Poitou-Charentes region.Initially belonging to the Montardy, the castle of Lascoux dates back to the fourteenth century. He then moved on to the family of Pontbriand, who rebuilt it in the sixteenth century. In 1593, he hosted a conference between Catholics and Huguenots. The Foucauld became owners of it in the seventeenth and eighteenth centuries and then in the following century it passed to the Lau d'Allemans family. It has been the subject of many modifications and restorations, particularly in the twentieth century, retaining very few elements of the sixteenth century.