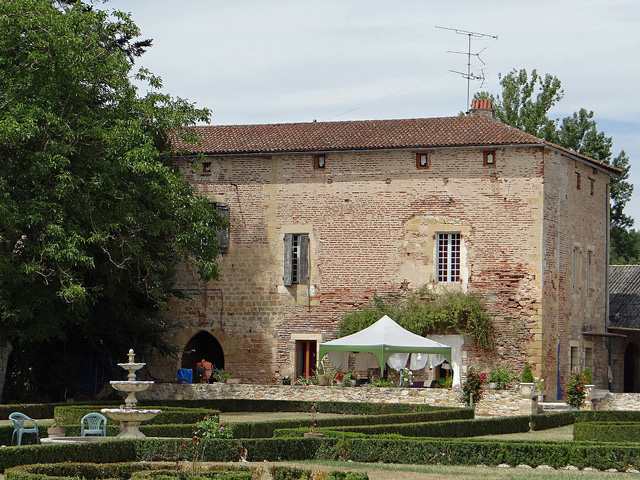 Location: Saint-Vite, in the Lot-et-Garonne departement of France (Aquitaine Region).
Built: 16th century.
Condition: In good condition.
Ownership / Access: Private property.
ISMH Reference Number: PA47000071
Notes: Château de Lapoujade is located in the municipality of Saint-Vite, in the department of Lot-et-Garonne. When Edward I take back possession of Agen, in 1279, after the Treaty of Amiens, he will undertake, to 1289, to make it navigable Lot to facilitate the transport of goods to Bordeaux Quercy. He built eleven dams, or "payssières" on the Lot at the end of the thirteenth century in the bailiwick of Penne, on a journey of 22 kilometers. It instructed his constable in Bordeaux, of Angolive, to a sum of 10,000 pounds to master André disposal to carry out the business. The construction was entrusted to different contractors, often militate castri nearby, bourgeois or ecclesiastical. Thus we see the Lustrac undertake the construction of a dam and the castle. The Paga build the dam Rigoulières, the pastor of Trentels, Bernard de Podio, finance the dam Grimardie. This work started in 1291 will be carried out quickly at a cost that does not exceed 4000 pounds. They will be stopped in 1294 when Philippe le Bel seized Agen to not make the King of England in 1303. But in 1311, at the request of the King of England an inquiry is made on Guillaume Cazes dams, Agen judge. To monopolize the tolls, the lords of the area were built near fortified edifices. King never managed to regain all rights to these dams. The war of Sardis and the Hundred Years War will make the owners of towers valuable allies for any opponent. In 1372, at the request of the Duke of Anjou, the castle has been the defense by Raymond Pugeade. Facing the cliffs of Roques-Gardillou, it then appears as a round stone at the first level and brick on top, isolated by a gap of a pregnant brick, and preceded by a drawbridge. In the second half of the fifteenth century a spiral staircase is built in the courtyard. The fortified house then belongs to the family of Drop, lords of the Poujade. It is enlarged during the first half of the sixteenth century. A Renaissance gallery is built on the court, probably Jean de La Goutte, King's secretary. The second floor is truncated and openings are changed in the nineteenth century. A stable barn is built on the back of the castle. The castle was registered as historical monuments June 19, 2007.