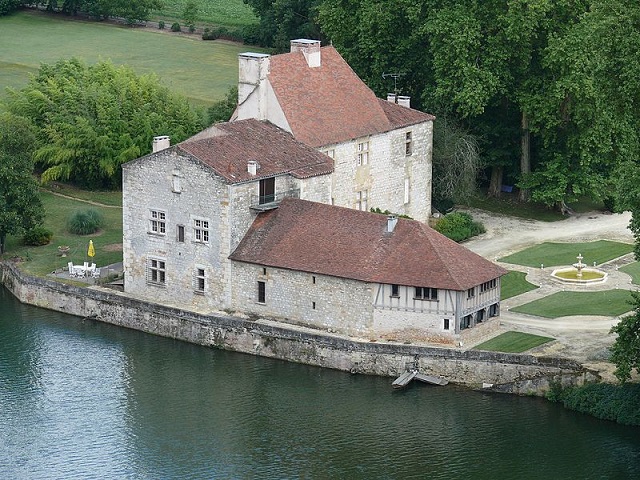 Location: Montayral, in the Lot-et-Garonne departement of France (Aquitaine Region).
Built: 13th century.
Condition: --.
Ownership / Access: --.
Notes: The castle of Ladhuie was built on the banks of the Lot, on the territory of the commune of Montayral, in the department of Lot-et-Garonne.When Edward I took possession of the Agenais, in 1279, after the treaty of Amiens, he was about 1289 to make navigable the Lot to facilitate the transport of goods from Quercy to Bordeaux. He built eleven dams on the Lot at the end of the 13th century in the bailiwick of Penne, on a course of 22 kilometers. He instructed his constable in Bordeaux, of Angolive, to put a sum of 10,000 livres at the disposal of Master Andre to carry out the undertaking. Construction has been entrusted to various contractors. This is how the Lustrac take charge of the construction of a dam. This work begun in 1291 will be carried out quickly at a cost which has not exceeded 4,000 pounds. They were arrested in 1294 when Philip the Fair seized the Agenais and returned it to the King of England in 1303.But in 1311, at the request of the King of England, an inquiry was made into the barrages of Guillaume Cazes, the judge of Agen. To seize tolls, the local lords built fortified buildings nearby. The Tower of Orgueil rests on one of these dams. The castle was then built to control the dam and levy rights of way. During the Hundred Years' War, in 1424, the Tower of Pride, also known as Ladhuie or Laduguie, was taken by Lancelot de la Barthe of the English party. It is taken up by Naudonnet de Lustrac who fights for the King of France. According to Gilles Séraphin, the Ladhuie or Laduguie tower was replaced at the end of the fifteenth century by a manor, perhaps for Armand de Laduguie mentioned between 1502 and 1506. Armand de Laduguie was married to Jeanne de Lustrac, daughter of Anthony I of Lustrac. A second building was erected against the old building at the end of the sixteenth-seventeenth centuries, probably for the Lagoutte family. In 1695, notarial documents mention Jacques de La Goutte, Lord of Buscon, living in his castle of La Duguie, brother of François de La Goutte, lord of Lapoujade in Saint-Vite. The house was enlarged during the first half of the seventeenth century. The castle was seized at the beginning of the Revolution as well as the emigrant Brous Cézerac. He is sold on 24 Thermidor Year II to Jean Maydieu for 160,000 livres. The castle was registered as a historic monument on June 20, 1950.