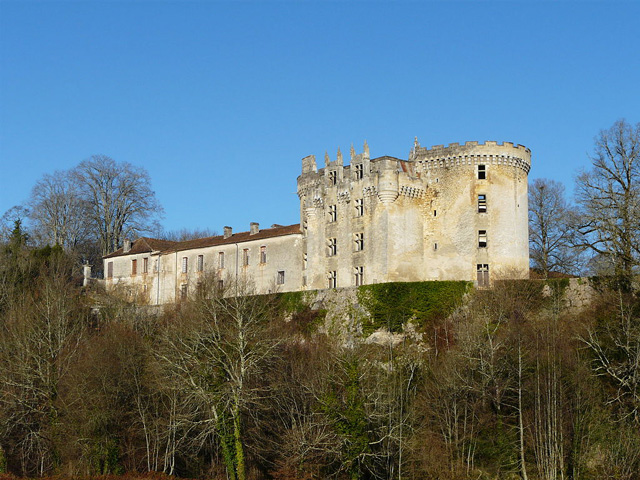 Location: La Chapelle-Faucher, Dordogne departement of France (Aquitaine Region).
Built: 13th-15th century.
Condition: Ruined.
Ownership / Access: Privately owned.
ISMH Reference Number: PA00082479
Notes: Château de La Chapelle-Faucher is a French château located in the town of La Chapelle-Faucher in the Dordogne, in the Aquitaine region. Since 2001 he is partly classified, partly registered as historical monuments. A fortress was built in the early thirteenth century by Fulchier of Agonac. It was destroyed during the Hundred Years War and then rebuilt in the late fifteenth century. In 1569, during the religious wars, a Huguenot troops commanded by Admiral de Coligny kills 260 Catholic peasants who had taken refuge there. A gatehouse is set in the seventeenth century that the fortifications and the drawbridge were razed. In the eighteenth century, adding a house contiguous to the castle towers. In 1916, a fire caused by lightning destroyed the roof of the castle. The two round towers and the former main building they enclose are classified historic buildings since May 29, 2001 while the rest of the buildings of the castle, its dependencies, its gatehouse and dovecote, located beyond the main road 3, are registered as historical monuments since February 13, 2001.

How To Get To Château de La Chapelle-Faucher (Map):