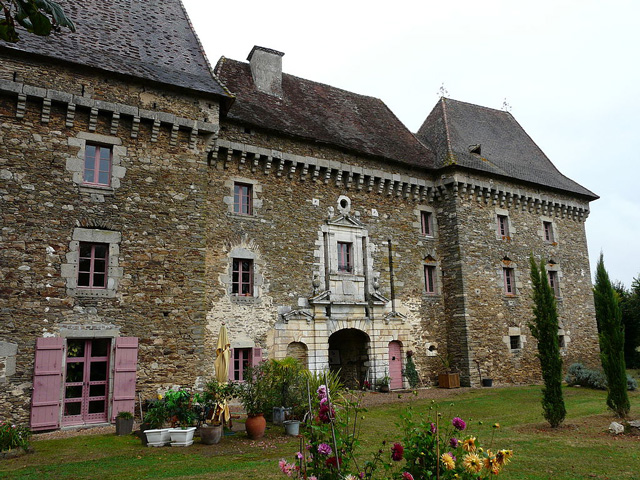 Location: Saint-Pierre-de-Frugie, Dordogne departement of France (Aquitaine Region).
Built: 15th-16th Centuries.
Condition: Ruined.
Ownership / Access: Private property.
ISMH Reference Number: PA00082891
Notes: Château de Frugie is a French château located in the municipality of Saint-Pierre-de-Frugie in the Dordogne, in the Aquitaine region. The Frugie Castle is northeast of the Dordogne, 100 meters southwest of the village church of Saint-Pierre-de-Frugie. This is private property. Originally, it was in the form of a quadrilateral with northwest and southeast sides disappeared. At the beginning of the twenty-first century, two buildings lines remain: southwest, the current home flanked by two rectangular massive towers, all crowned with battlements outward; northeast of the ruins covered with ivy and preceded by a dry moat with, inside the remains of a chapel. It is a listed building since 1968 for its facades and roof. The current castle, built in the fifteenth and sixteenth centuries, follows a medieval fortified hideout destroyed in conflict with the British. The south entrance of the house is decorated with a Louis XIII portal that preceded previously a drawbridge removed during the filling of the moat. The chapel dates back to the seventeenth century portal.

How To Get To Château de Frugie (Map):