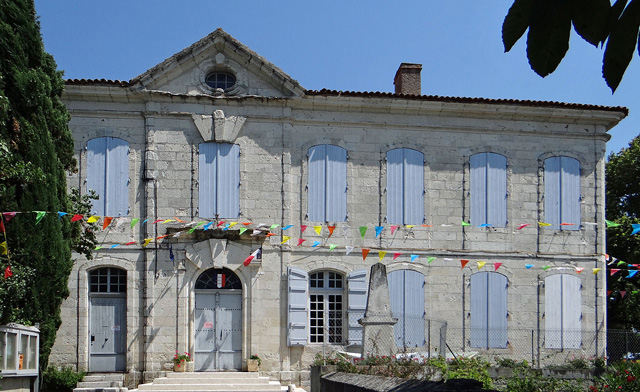 Location: Frégimont, Lot-et-Garonne departement of France (Aquitaine Region).
Built: 18th century.
Condition: Restored.
Ownership / Access: Owned by the Municipality.
ISMH Reference Number: PA00084124
Notes: Château de Frégimont is a French château located in the commune of Frégimont. A first castle is quoted in the saisimentum, taking possession of the King of France on the lordships of the Count of Toulouse, in 1271, after the death of Alfonso de Poitiers and Jeanne, countess of Toulouse, without issue. The Lordship of Frégimont belongs to Montpezat Montpezat when Amanieu seized it in 1418. At the end of the seventeenth century it became the property of the family of Lusignan. In 1769 the manor was bought by Jean-Pierre Villate Lagrave, Bordeaux and lawyer notable. Jean-Pierre Villatte is married to Louise Secondat, granddaughter of Montesquieu. The castle was described as being in ruins, still with a tower serving jail, barn, stables, cellar, oven, sink and farmyard, surrounded by walls and ditches. The new lord built, around 1775, the current home in a conventional party, probably by an architect or engineer agenais after the destruction of the old castle. March 30, 1846, Jean-François Louis de Montesquieu Secondat sold the castle to the town making it the seat of the town hall and primary school. A restoration is conducted by architect Leopold Payen, in 1898, the work being done by Jean Dangas, mason Bazens. In 1899 there is a change of use of rooms, repairing the stairs, ceilings and roof. The castle was registered under the historic monument September 23, 2008.