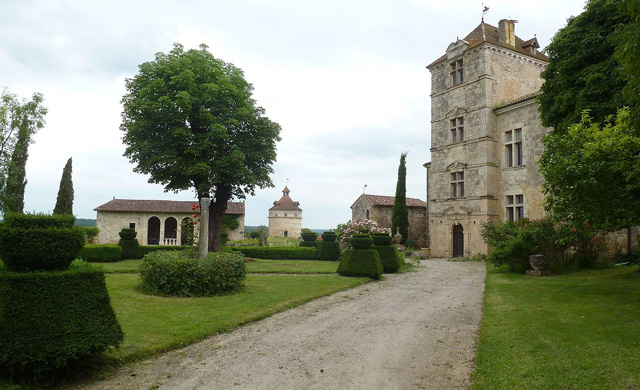 Location: Fréchou, Lot-et-Garonne departement of France (Aquitaine Region).
Built: 13th, 16th century.
Condition: In good condition.
Ownership / Access: Cazenove Family.
ISMH Reference Number: PA00084123
Notes: Château de Fréchou is located in Fréchou. The castrum Fréchou is quoted in 1259. It is owned by the family of Cazenove. The two towers date from this time. Alain Montpezat was married a second contract of 4 November 1536 Françoise de Gua, the Fréchou1 lady. In 1539 he paid tribute to the lordships of Thouars, Fréchou, Savignac and Saint-Julien. Alain Montpezat did his eldest son his heir to the marriage contract with Françoise de Gua, but it had become a Protestant, he established his second son, Francis de Montpezat, his sole heir. Alain Montpezat died in 1561. The brother of Alain Montpezat, Antoine, had his marriage to Françoise Verdun two children, Jean de Montpezat. He died in Naples in 1558 by his cousin François Montpezat his heir. François Montpezat has also inherited the lordship of Laugnac but few stayed at the castle of Laugnac. François Laugnac has mostly stayed at Castle Fréchou. François Baron is Montpezat Laugnac, governor of Agen in 1569. He had built the pavilion housing the off-work staircase ramp, the west wing and the entrance pavilion with access to the courtyard from the town. The tower was placed under monument May 26, 1952.