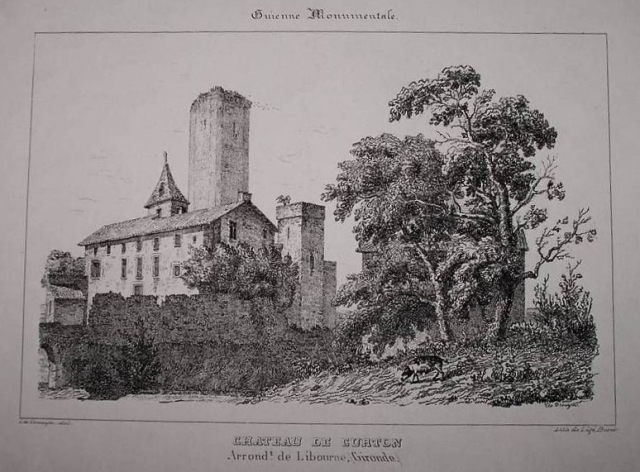 Location: Daignac, in the Gironde departement of France (Aquitaine Region).
Built: Not specific but at 13th century, there was a mention of the castle.
Condition: In good condition..
Ownership / Access: Privately owned. Now a wine chateau.
ISMH Reference Number: PA00083535
Notes: Château de Curton is a medieval castle located in Daignac, in the French department of Gironde and the natural region of the Entre-deux-Mers. Registered as historical monuments, it is now a wine chateau. The first member of the family of Curton quoted by the official texts is Raimond de Curton from the century xie. It then appears as Lord early in the twelfth century. By the end of the twelfth century, seems close Régin Curton of the English royal power and signs a treaty Londres. In the thirteenth century, we find the mention of the Castle of Curton and his master of Amanieu Curton. At the beginning of the Hundred Years War, Edward III of England asked Arnaut de Curton to remain faithful to him and defend against the attacks of Guyenne French. To thank him, he gave him jurisdiction over four parishes surrounding the castle of Curton, Daignac, Espiet, Grézillac and Tizac-de-Curton. Later, two descendants of the Lord of Curton distinguished themselves: Petiton de Curton, a true hero of romance and always present where there were striking a blow and Sénebrun of Curton, son of Arnaut and Lord of Curton, who fought alongside the Black Prince. In the early fifteenth century the lordship of Curton passed into the hands of Navarre Beaumont house with the wedding of Charles and Anne de Beaumont Curton. Their son Louis de Beaumont inherited the castle, before it is taken by the French and then given to Jacques I de Chabannes La Palice, Lord of La Palisse and Madic, who was to die of wounds received at the Battle of Castillon. The Lordship of Curton remained in the family of Chabannes La Palice whose members distinguished themselves more or less. In 1563 the barony of Curton was erected in marquisate in favor of François de Chabannes. The castle was confiscated during the Revolution as national property sold to citizens Rabeau and was transmitted from this period by successive sales and alliances. Registered as historic monuments by order of 7 January 1926, it is owned by a private person and is not open to visitors. Curton Castle is also a wine chateau of the vineyards of Entre-Deux-Mers. Red wines and rosés products have the AOC Bordeaux appellation.

How To Get To Château de Curton (Map):