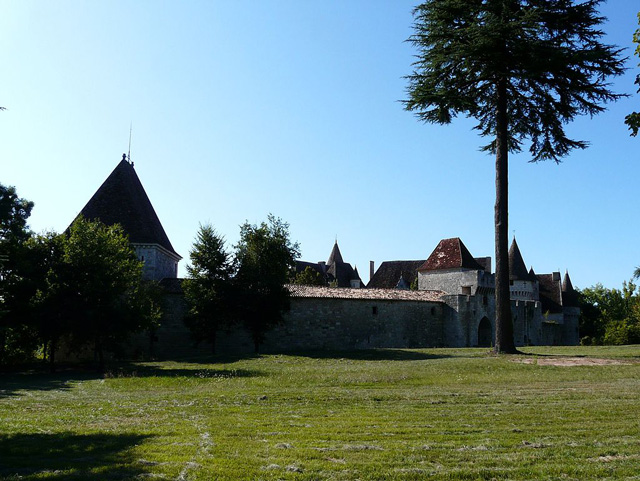 Location: Ribagnac, in the Dordogne departement of France (Aquitaine Region).
Built: 15th-16th century.
Condition: In good condition.
Ownership / Access: Privately owned.
ISMH Reference Number: PA00083078
Notes: Château de Bridoire is a French castle in the town of Ribagnac in the Dordogne, in the Aquitaine region. It is under protection as historical monuments. The renaissance castle is not threatened. Certainly its path, like forty hectare park spread over three communes (Ribagnac, Rouffignac de Sigoulès Singleyrac and) are still the property of the spouses Guyot and the mayors of these municipalities had launched a procedure for retrieve different plots, due to late payment of property tax since 2007. This procedure fails, the manager of the park's owner company is manifest, she wrote to the prefect and mayors to inform them of his displeasure, threatening to take legal proceedings. Suffice to say that the reunification of the park and the castle is not in the agenda. On 19 September 2013, the unclassified parts of the castle (terrace, park, public, and walks Grimoudou and Gardonnette, spanning neighboring towns of Rouffignac-de-Sigoulès Singleyrac and) are listed under historical monuments. The castle, which has already welcomed more than 90,000 visitors since its opening, opens its doors for a third season in 2014. That year, visitors can bring their picnics can find locally picnic baskets, with even more pieces restored and new animations. A new legal proceedings on appeal before the Administrative Court, is engaged by the buyer ousted in 2011. He asked that the sale be broken and be reconsidered his case. Admittedly, the current owner, in an article in the South West newspaper of 21 December 2013, acknowledged that he could not develop its tourism project without illegally using land without any authorization (entrance and parking). If this situation continued, he would be obliged to end his adventure in a year or two, proof that the administration may not have made the right choice. Justice will have to decide.

How To Get To Château de Bridoire (Map):