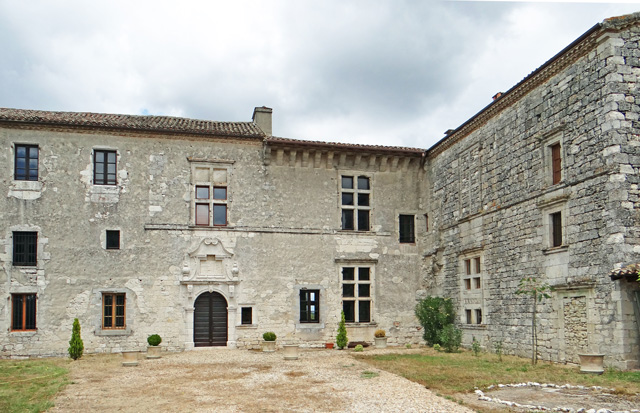 Location: Beauville, in the Lot-et-Garonne departement of France (Aquitaine Region).
Built: 13th century.
Condition: In good condition.
Ownership / Access: Owned by a private person.
ISMH Reference Number: PA00084075
Notes: Château de Beauville is a castle located on a rocky promontory, defending the old walled town of Beauville (Lot-et-Garonne). Foundations and the foundations date from the late thirteenth century. The main building dates from a reconstruction of the sixteenth century.4. The castle had T plan but one wing was destroyed. Part of the castle has retained a crowning battlements. Some high windows are double mullions. It is inside a large staircase and interesting old kitchens. François de Beauville in 1574 leads the defense of the castle against the protestants5. The castle belonged to Talleyrand in the seventeenth and eighteenth centuries. It served as a gendarmerie barracks 1831-19766. The staircase and kitchen were listed historic monument December 11, 1925, then it is the whole of the house, the old curtain and the floor of the courtyard that were registered 10 February 2006. Part of the building dated sixteenth century is adorned with mullioned windows. The Renaissance architecture is also present in the front door and chimneys. Finally, a wing of the building was rebuilt in the nineteenth century.