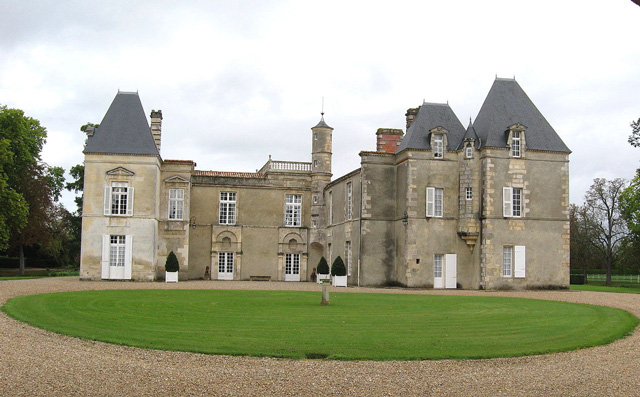 Location: Cantenac, in the Gironde departement of France (Aquitaine Region).
Built: 1851.
Condition: In good condition
Ownership / Access: Cruse family.
ISMH Reference Number: PA00083506
Notes: The Château d'Issan, is a winery located in the Gironde Cantenac Margaux. AOC Margaux, it is ranked third vintage in the official classification of Bordeaux wines of 1855. Legend has it that the wine from this area was served May 11, 1152 when Eleanor of Aquitaine married Henry Plantagenet, future King of England. Wine is served in the nineteenth century at the court of Emperor Franz Joseph in Vienna justifying the motto of Château d'Issan: Regium mensis aris that deorum ( "For the table of kings and the altar of the Gods"). It was acquired by the family in 1851 Blanchy. Roy family acquired the estate in 1865. The Château d'Issan is an area of ​​the Bordeaux region after a long history that makes today one of the most famous wines of Margaux. In the nineteenth century, the Roy family (particularly in 1866 under the able administration of Gustave Roy) endowed the field admirable winery and winery and Chateau d'Issan allowed to be registered in the famous classification of great wines of 1855. Property of the Cruse family (in) since its purchase in 1945 by Emmanuel Cruse, the millionaire Jacky Lorenzetti becomes co-owner in 2013. The monument is the subject of a registration as a historic monument since June 16, 1970.

How To Get To Château d'Issan (Map):