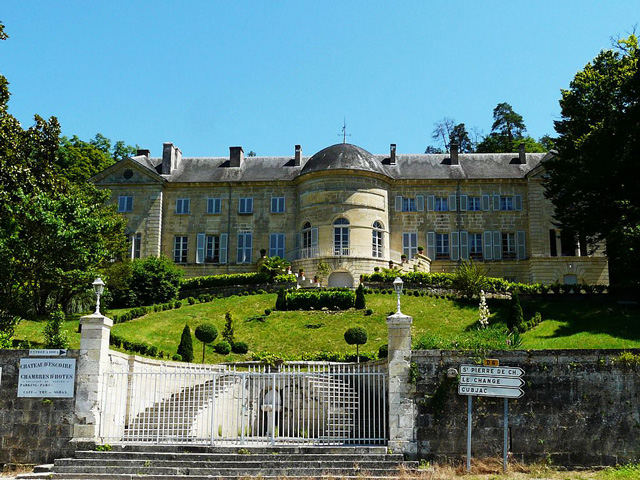 Location: Escoire, in the Dordogne departement of France (Aquitaine Region).
Built: 18th century.
Condition: Restored.
Ownership / Access: Sylvie and Tase Kordalov.
ISMH Reference Number: PA00082525
Notes: Château d'Escoire is a French château located in the municipality of Escoire in the Dordogne, in the Aquitaine region. It is under protection as historical monuments. The entire castle was restored, like the rotunda whose entrance is to the right of the stairs. The castle has a nine-hectare park, accessible to customers. The castle dates from the second half of the eighteenth century. On the night of October 24 to 25, 1941, the castle was the scene of a triple crime remained mystérieux4. Henri Girard, known as a writer by the name of Georges Arnaud, was suspected of murdering his father Georges Girard, owner of the castle and senior official of the Vichy government, his aunt Amelia and their good Soudeix Marie. In the morning, Henry, who had slept in a wing of the castle warned his neighbors that he had found three bodies hacked to death with sickle. Defended by master Maurice boy is finally acquitted for lack of evidence, on 3 June 1943 In 1954 the castle is listed as a historic monument for its facades and roofs. About 1950 until the late 1970s, this castle was the vacation place for the children of the Parisian company LMT ( "The Telephone Equipment"), acquired successively by Thomson and Thales. Abandoned for years, the castle of Escoire is currently owned by Sylvie and Tase Kordalov originating in Macedonia but old hotel in Normandy, who live in one wing while the other part has been converted into guest rooms.

How To Get To Château d'Escoire (Map):