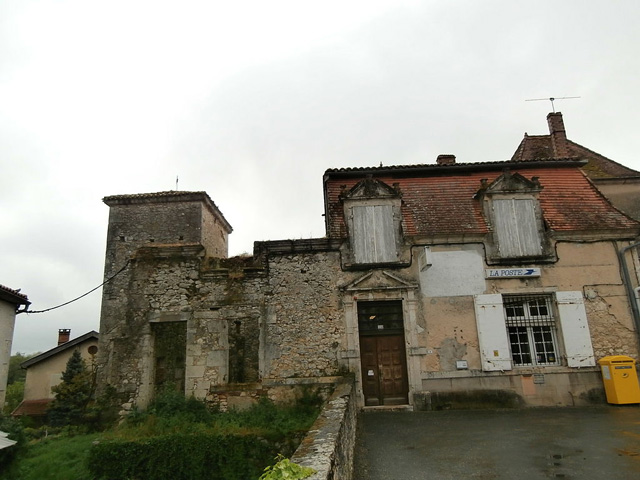 Location: Ambrus, in the Lot-et-Garonne departement of France (Aquitaine Region).
Built: 16th century.
Condition: Ruined.
Ownership / Access: Owned by the Municipality.
ISMH Reference Number: PA00084069
Notes: Château d'Ambrus is a castle located at a place called The Park, north of the village of Ambrus in Lot-et-Garonne. The castle is mentioned in the tribute made in 1259 by four co-lords. According to this, a third of the land belonged to Bertrand de Xaintrailles, another third to Raymond Bertrand Gelas, a sixth Raymond William Vidalhac and one sixth to a person whose identity is unknown. It is the same in the homage of 1279. On April 12, 1286, Sénébrun Xaintrailles received the King of England all rights to the castles of Xaintrailles Ambrus and Villeton1 The castle belonged to the families of Pins Piis to Feugas, Pardaillan, Ferron. Vital Loupiac, Sénébrun Xaintrailles, Guilhaume of Vidailhac, Raymond Bernard of Gélas then Pothon Xaintrailles in the fifteenth century, were lords of Ambrus When tributes 1259 and 1279 the châteeau was to include a tower, or keep, section 6 x 6.60 meters wide and three floors, with a small enclosure courtines2. The presence of an archer in flared cross or double-horizontal bracket referred, at the top of the tower shows that these elements were added later. A home in L was built north of the tower with a corner tower and an enclosure in the fifteenth century. The entrance, northwest, by a gatehouse with bretèche may date from the late sixteenth century. In the eighteenth century, a house with farm outbuildings have closed court. The dungeon is dethroned in the revolution. The castle was listed as historic monuments in 1988.