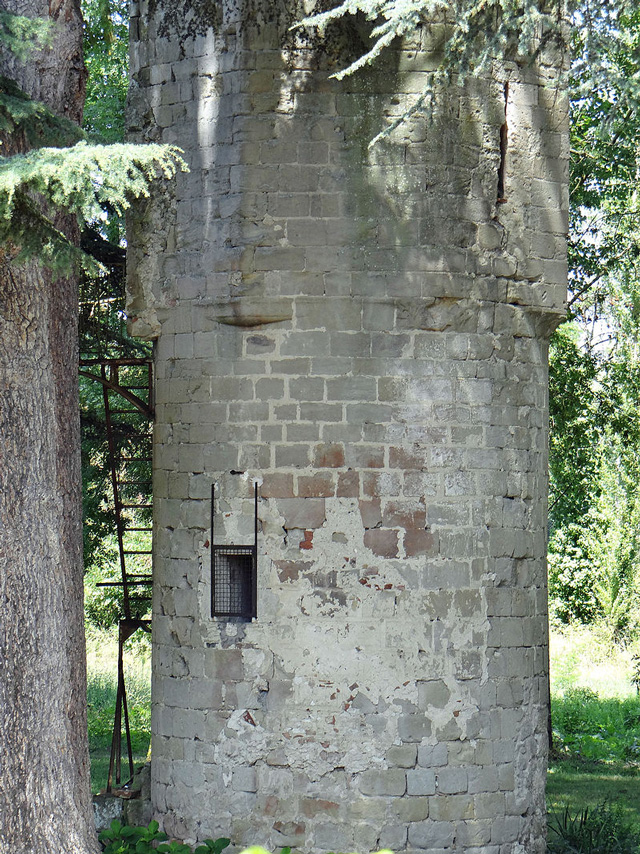 Location: Allemans-du-Dropt, in the Lot-et-Garonne departement of France (Aquitaine Region).
Built: 13th century.
Condition: Ruins.
Ownership / Access: Privately owned.
ISMH Reference Number: PA00084064
Notes: The Chateau of Allemans-du-Dropt is a castle in Allemans-du-Dropt in Lot-et-Garonne. The original castle was built in the thirteenth century. There remains one of its corner towers which is round at the base, octagonal in its upper part with a ribbed dome. In the fourteenth century the castle was given to Bertrand de Goth, Lord of Monteux and nephew of Pope Clement V by the King of England who wishes to take one of his followers. Goth family is one of the strongest Guyenne thirteenth-fourteenth century. Bertrand de Goth provided in his will that his daughter Regine be his sole heir, but with a substitution clause in case she would die without an heir. Bertrand de Goth died. in 1324. His daughter Régine Goth is married to John I Count of Armagnac. Régine Goth dies without an heir in 1325. It will follow a period of inheritance disputes between the Count of Armagnac and the heirs planned in the substitution. In 1336, the castle is owned by a nephew, Bernard Lamotte. In the fifteenth century, the castle is owned by the Ricard family, notaries family living Castle Fremauret at Roumagne. Pierre Ricard died childless, his widow Jeanne Bouilhaguet wife December 18, 1575 at the chateau of Allemans John VAUCOCOUR, écuyer1. It then goes to the family of Cars and to the family of Sansac, from Saintonge came to settle in Allemans in 1654, who retained until the Revolution. The original castle, destroyed during the Revolution, was demolished because of its state of degradation. Only the west wing was preserved and a tower. This wing had to be built in the sixteenth and early seventeenth century. You can see the mullioned windows and a door lintel of this old building. The main building was redesigned by adding to it two pavilions located on either side of the central body. The castle tower was listed as historic monuments in 1984.