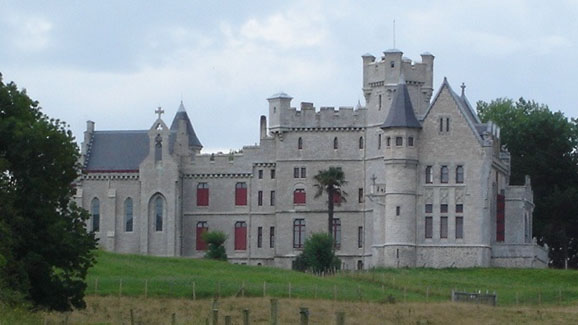 Location: Hendaye, in the Pyrénées-Atlantiques departement of France (Aquitaine Region).
Built: 1864.
Condition: Good condition.
Ownership / Access: Owned by the Academy of Sciences.
ISMH Reference Number: PA00084395
Notes: Château d'Abbadia is a castle of Gothic style located in the town of Hendaye (Pyrénées-Atlantiques) in the province of Labourd (6 km from Saint-Jean-de-Luz and Hendaye 1 km) . Built by Eugène Viollet-le-Duc and Edmond Duthoit on a command of Antoine d'Abbadie, it is classified as a historical monument and of the illustrious house. The rich scientific collections, archives and furniture are original and represent a considerable representative cultural heritage of the nineteenth century. The castle is now the property of the Academy of Sciences. In 1895, Antoine d'Abbadie bequeath his property to the Academy which he is a member in 1867 and president in 1892, with the condition that the observatory was directed by a priest. He donated to the academy in particular to finance astronomical work at the observatory of Abbadia. Upon closure of the observatory in 1976, the Academy created the Prix Antoine astronomy Abbadie30. Commercial management of the castle was ensured by Antoine d'Abbadie Foundation until 2011. By delegation procedure Service Public (DSP, management has since been assigned to the town of Hendaye and its tourist office. The castle is classified as a historic monument 21 December 198431. The observatory Abbadia is the first and only decimal observatory. The remarkable decimal meridian telescope built by Eichens W. (1879) and its accessories is the only copy in the world whose circles graduates are divided into 400 degrees then décigrades. The microscopes allow reading distances polar 1/10 000 grade closely. On 25 October 2001, this ensemble was classified as historical monuments. Furniture and furnishings were classified under Historic Monuments 1 April 2003 (classification order of 10 September 2003). They constitute a remarkable historical and artistic whole. The castle has been from 1997 to 2008 an extensive restoration program with the support of the Regional Directorate of Cultural Affairs of the Aquitaine Region, the Department of Pyrenees-Atlantiques, in the Rhône-Poulenc Foundation-Institut France and a patron.