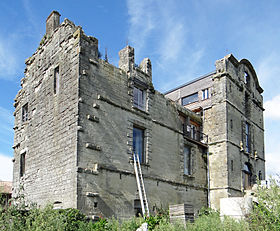 Location: Monteton, in the Gironde departement of France (Aquitaine Region).
Built: 17th century.
Condition: In good condition.
Ownership / Access: Private property.
Notes: The castle of Monteton was built in Monteton, in the department of Lot-et-Garonne.Part of the family left France for Prussia where she became the German branch of the family, the Digeon von Monteton. Thus the widow of Pierre de Digeon, the lady Anne de Briquemaux, who has the usufruct of her property, including the seigniory of Monteton, which is seized, and whose brother-in-law, Henry Digeon de Peyrières, Be transmitted. As a result of his departure from the kingdom, the same is done for the property of M. Digeon de Boisverdun. The Digeons of Monteton preserved the castle until the extinction of this family in 1835. The castle passes by inheritance to Leopold de Gervain who had restored the castle of Lasserre where it resided6. The castle was abandoned in the twentieth century. Partially restored, it was transformed into an inn. The castle was listed as a historic monument on 8 February 200.

How To Get To Château de Monteton(Map):