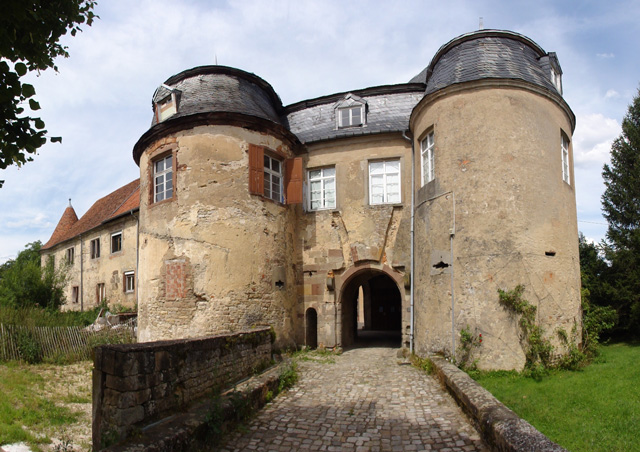 Location: Lorentzen, in the Bas-Rhin departement of France (Alsace Region).
Built: 14th, 16th, 18th, 19th century.
Condition: Ruined.
Ownership / Access: Privately Owned.
ISMH Reference Number: PA00085270
Notes: Site castral de Lorentzen is a set of buildings dating from the Middle Ages situated in the town of Lorentzen in the Bas-Rhin. The building is the subject of a registration as a historic monument since 4 May 1990. The castle, the mill, the tithe barn and main house are a remarkable and imposing together. The square layout of the castle reminiscent of the old Wasserburg (plain moated castle) built by Friedrich II Sarrewerden. The five towers of the feudal residence, there remains only three, and the basis of the fourth. Renaissance tower in the courtyard reflects the renovation of the sixteenth century. He spent the Nassau-Saarbrücken in 1683 and later became the dowager residence. The oak staircase evidenced by the concern to improve the Baroque. After the Revolution, the castle was divided into residential lots sold as national property in 1792. He serves as the stunning relic of own evolution in this country. The corn mill date in 1728 and operated until 1958. The archway in the middle of the building houses a wooden paddle wheel. The water of the river diverted downstream of the bridge Eichel happening in the channel under the current path to operate the system. The tithe barn built in 1770 received the tithe, one tenth of the harvest for the Lord. Stables and barns two arched doorways were a functional business unit.