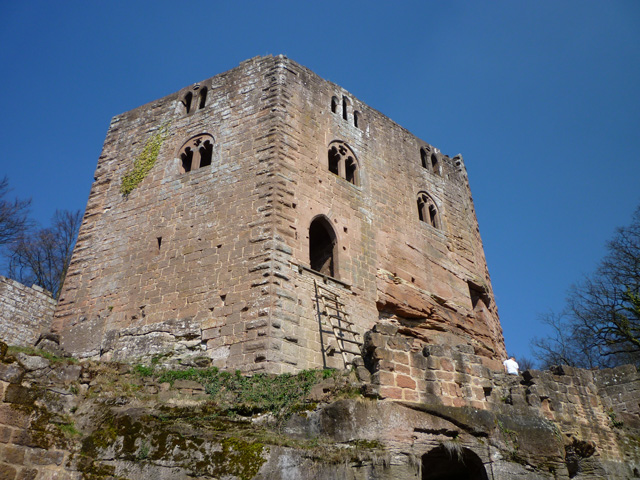 Location: Windstein, in the Bas-Rhin departement of France (Alsace Region).
Built: Extant by c.1250.
Condition: Ruins.
Ownership / Access: Owned by a private company.
ISMH Reference Number: PA00085238
Notes: New Castle Windstein is a historical monument located Windstein, in the French department of Bas-Rhin.The first mention of the castle dates back to 16 July 1205. Windstein Henri Philippe Hohenstauffen yields to a dependence of the castle. It transmits it to the Abbot Pierre de Neuenburg who built a house. It seems that this is the rock of New Windstein. This quickly became a den of thieves destroyed by Bertold of Bucheck helped by the city of Haguenau1. The castle was built by Wilhelm von Windstein (Windstein Guillaume) in 1340 on the ruins of the former. After his death, having no descendants, the castle became property of Roderich von Schmalenstein and Johann Ostertag von Windstein. In 1413 it became the property of the bishop of Speyer. In 1469 the castle became condominium Lichtenberg families, Henri Altdorf and Eckbrecht von Dürckheim. In 1515 during the Peasants' War the castle was damaged by the troops of Anton von Lothringen. In the seventeenth century is the family of von Eckbrecht Dürckheim that owns. The castle became refuge for local residents during the Thirty Years War. In 1680 the French troops of Baron Monclars besiege the castle. The chronicle tells that Obrist von Dürckheim only defending the castle then fled the roof is on fire; he joined the Palatinate region. His confiscated property shall be restored to the French State. In 1820 the ruins became the property of the family of Dietrich2. The building is the subject of a classification as historical monuments since 1983.