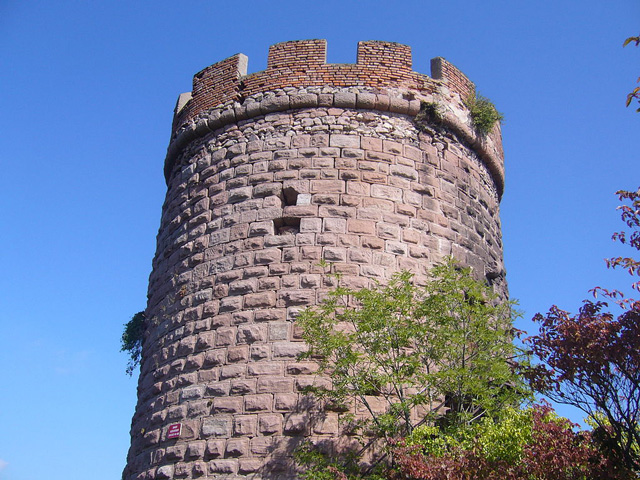 Location: Ribeauvillé, in the Haut-Rhin departement of France (Alsace Region).
Built: 13th-14th century.
Condition: Ruins.
Ownership / Access: Owned by the town.
ISMH Reference Number: PA00085585
Notes: Chateau du Haut-Ribeaupierre (Hoh Rappolstein) is one of three castles (with Girsberg and St. Ulrich) that dominate the town of Ribeauvillé in the Haut-Rhin. Located 642 meters above sea level, it dominates the other two. All three castles been a classification as historical monuments since October 1841 and February 1930. The Haut-Ribeaupierre is the oldest castle of Ribeaupierre since its existence is reported from 1084. One must probably its origin to the counts of Eguisheim, original owners of the land of Ribeaupierre. It was built on an ancient Roman site. Known for Altenkastel is Anselm of Ribeaupierre who takes possession of the castle towards 1288. In the thirteenth century it appears as the Old Castle. This castle has been visited by Emperor Rudolf IV of Habsburg in 1280 and 1284 and again in 1286 for a seat in which signed an important treaty was signed between the King of France Charles VII and the Lord of Ribeaupierre3. By this treaty, the latter undertook to always hold the fort open to the forces of the kings of France. Towards 1368, Bruno de Ribeaupierre becomes the owner of the castle. Vowing fierce hatred to the English, he locks in his dungeon knight John Harleston, who had had the misfortune to parade in the area with an imperial safe-conduct from 1384 to 1387. John Harleston not released until a ransom and cons following strong pressure empire. At the end of the thirteenth century, the castle became a residence of Ribeaupierre. Another brand prisoner will be locked in the dungeon of the Haut-Ribeaupierre in 1477. This is Philip I of Croy (1435-1511), Count of Chinay, an ally of Charles the Bold taken prisoner by the Ribeaupierre in Nancy.

How To Get To Chateau du Haut-Ribeaupierre (Map):