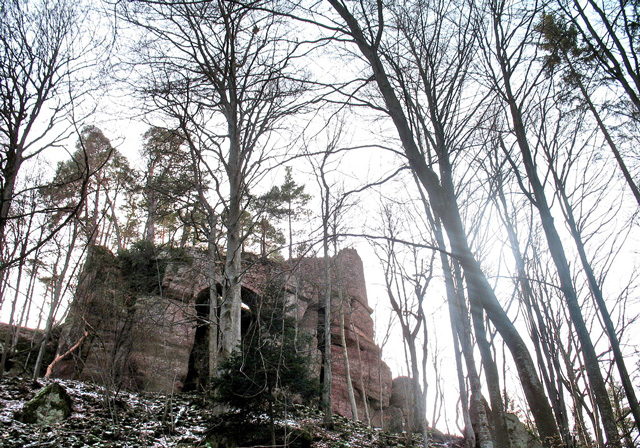 Location: Ottrott, in the Bas-Rhin departement of France (Alsace Region).
Built: 13th century.
Condition: Ruins.
Ownership / Access: --
Notes: The Chateau du Hagelschloss (also known as Chateau de Waldsberg) is a ruined castle in the commune of Ottrott in the Bas-Rhin département of France. It was constructed in the 13th century. Hagelschloss is probably named because of its position dominating the Hagelthal valley. In the 19th century, it was known as Waldberg and is mentioned as such in certain historic documents. The castle appears on the French Ministry of Culture database and is described as being in a poor state, but has no official protection as a monument historique. The castle is situated on the Hohenburgberg facing and to the north of Mont Sainte-Odile. It is close to The Pagan Wall of Mont-Sainte-Odile, and certain stones from the castle seem to have been borrowed from this wall. The castle can only be reached on foot, using footpaths provided by the Club vosgien.

How To Get To Chateau du Hagelschloss (Map):